If you thought the food your roommate cooked was unique, take a look at these international delicacies.

The foods on this list might sound strange to visitors, but for the locals of these exciting destinations it’s just another day in the kitchen (when we’re not talking about one of the wallet-breaking options, of course). Check out 10 odd but incredible foods you’re not likely to find in your local grocery store.

10 Strange Food Delicacies From Around The World 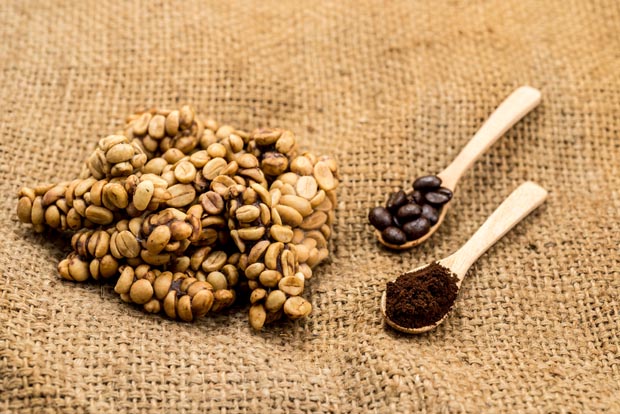 This Indonesian coffee takes longer to prepare than your usual cup of joe. That’s because each bean has to pass through the digestive system of an animal, specifically the Asian palm civet. These cat-like critters eat the coffee cherries, then leave the beans behind in their own ‘fragrant’ packaging.

Talk about rich in flavor. The local people trust the palm civet’s taste though, since it eats only the ripest coffee cherries, making for a quality coffee, with just a few added ingredients.

Interested? All you need is $600, the average price for a pound of this aromatic coffee. 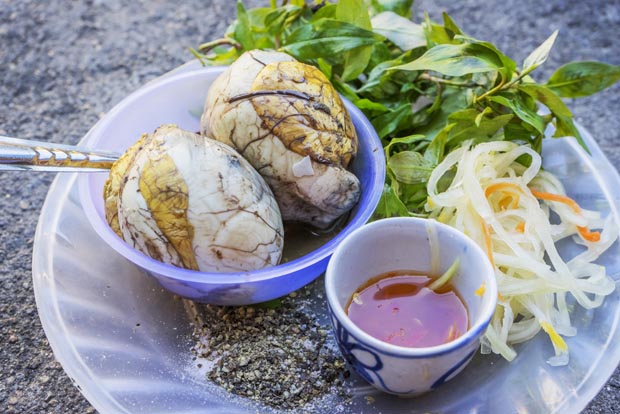 How do you like your eggs? Over easy? Scrambled? How about with a baby chicken inside? That might sound gruesome, but it’s exactly what is served in the Philippines under the name of balut.

These eggs are boiled just before the chick is meant to hatch. Along with your yolk, you can expect some fur, a beak, and maybe even a little pair of eyes. Lots of shops will let you choose how far along your egg was, so you can control the amount of chicken inside the shell.

Try it the local way, with a bit of lemon juice, salt and pepper, plus a dash of chili sauce. Filipino’s enjoy balut about as often as Americans eat hot dogs. 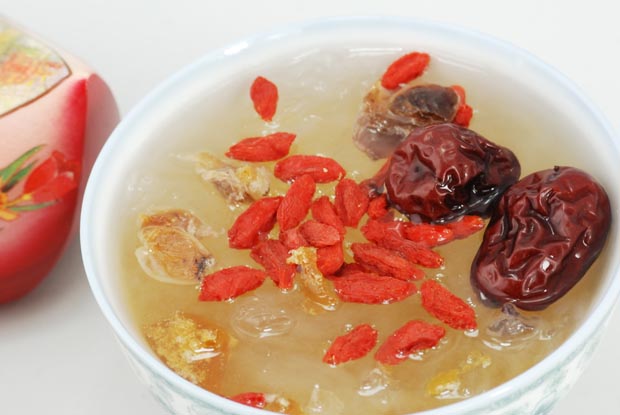 Twigs and dirt might not sound like a gourmet meal, but in parts of China, people are catching a high price for this bird’s nest soup.

The swift bird uses mostly saliva to make a sticky, clear nest for its young. The saliva nest is then harvested and turned into a soup for high paying customers. 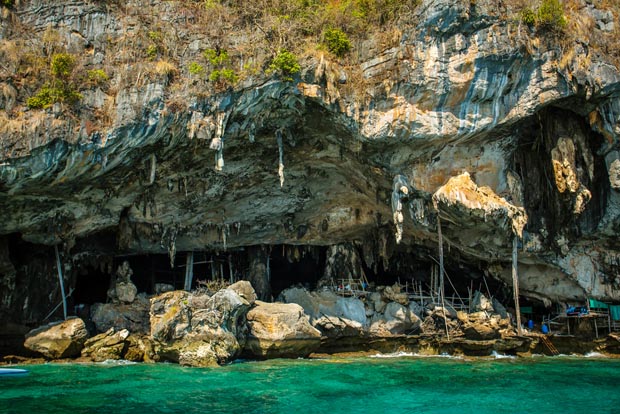 The saliva creates a rubbery texture that is one of the most expensive animal products on the market, selling for up to $100 a bowl.

The swift bird usually nests in coastal caves, making it a dangerous job to harvest their nests, adding to the price of this digestive delicacy. 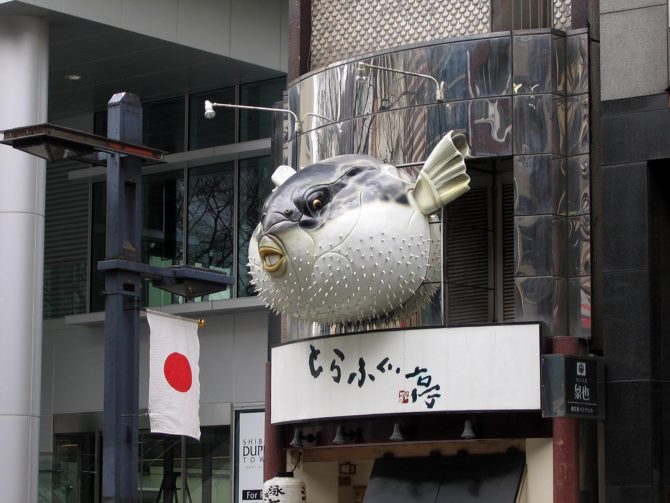 This fish has a killer (but delicious) reputation. One wrong cut, and the chef could be serving his customer their last meal. The skin and organs of the puffer fish carry a poison that could paralyze and possibly kill you, if consumed in the right dose.

Don’t worry, chefs in Japan undergo rigorous training before they’re allowed to put fugu near a customer’s plate. Still, it’s best to do your research before making dinner plans. While chefs are highly skilled at preparing puffer fish safely, there is no antidote for its poison. 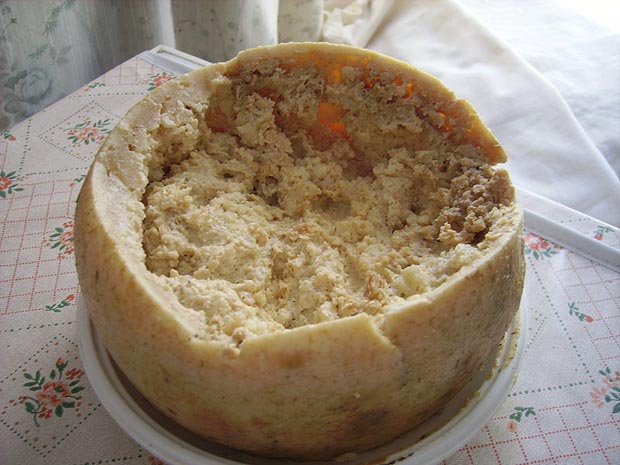 More wine with your cheese? How about some maggots instead?

It’s obvious this sheep’s milk cheese is past its prime, but that hasn’t stopped the people of Sardinia, Italy from eating it. The EU even tried to ban this larva filled snack for its obvious health risks. In response, the people of Sardinia motioned to put it on the official ‘Traditional Food’ list, meaning it doesn’t have to follow typical hygiene standards.

As of now, the legal status of maggot cheese is still under question, and available in restaurants for your dining pleasure. 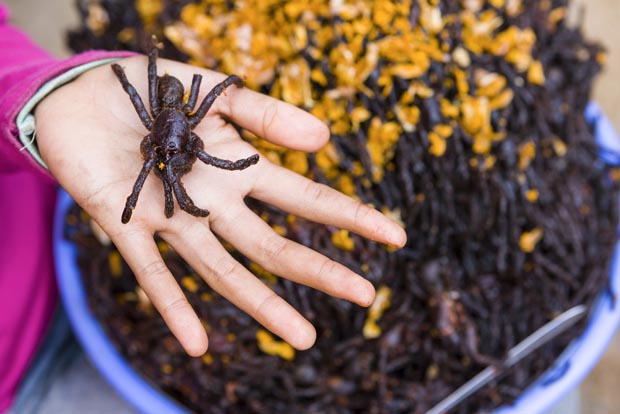 These are not the spiders from your nursery rhymes. Cambodia’s tarantulas are big, hairy, and fried crispy.

Busloads of traveler’s unload daily at the market town of Skuon, where baskets full of these fried, fanged arachnids are sold. Apparently they taste like crickets, if that makes you feel any better. 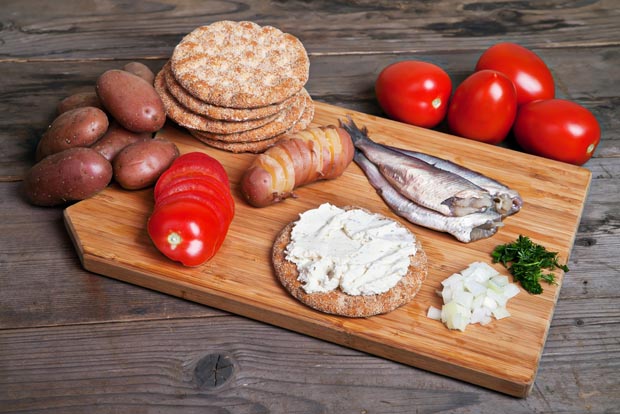 In Sweden, just enough salt is added to this fermented herring to keep it from rotting.

There’s a reason this fish is usually eaten outdoors. After being left to ferment for 6 months, opening the can produces a smell strong enough to clear the room.

Unless you’re a local, that is. In that case, you’ll likely have your surstromming with some crisp bread and a few potatoes, then wash it down with a light beer. 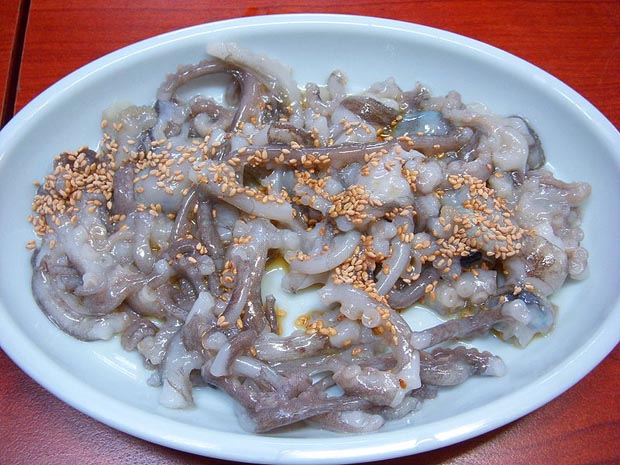 You’ve probably heard of raw food, but how about still wiggling? This Korean octopus dish, served while there’s still life in the tentacles, will fight you all the way down.

Dip it in sesame oil to help it slide, but don’t be surprised if it suctions onto your teeth in its struggle to avoid the final destination of your stomach.

While some deaths actually have been reported from eating this dish, it’s safer than you think. Most people eat sannakji and live to tell the tale. 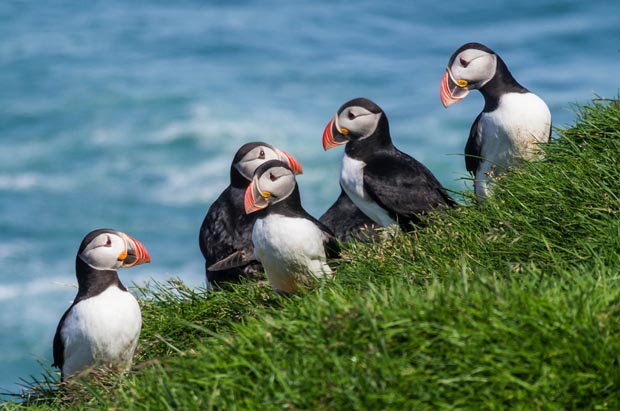 This adorable but clumsy bird isn’t the best flyer.

Maybe that’s why people in Iceland have such an easy time “sky fishing,” where they use big nets to catch low flying puffins. Afterwards the islanders treat this adorable bird to some first class treatment, breaking its neck, skinning it, and eating the heart while it’s still warm.

Romantic, isn’t it? If you’d like to see first hand how it’s done, watch Gordon Ramsay catch and eat a puffin on his cooking show, F Word. 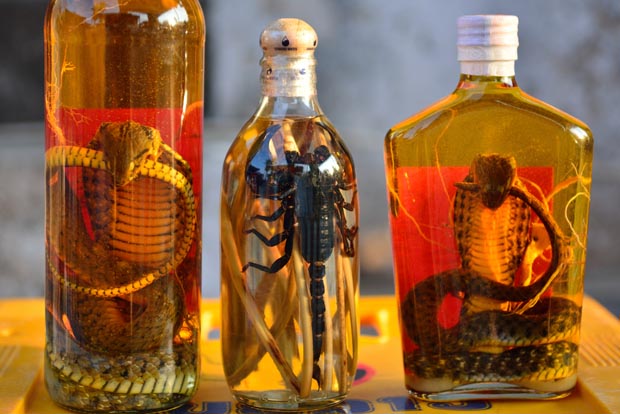 No grapes were harmed in the making of this wine. We can’t say the same for reptiles, though.

Snakes are caught, killed, and left to marinade inside a clear bottle of rice wine for months, allowing their poison and everything else to seep into the wine.

Snake poison is thought by Vietnamese to have medicinal qualities, though apparently the alcohol makes their venom inactive. If you’re skeptical, you might want to leave the bottle on your shelf as a souvenir.