Nantes, France Guide: A journey to Nantes, an artistic trail in the city!

Playful and creative, vibrant and young, Nantes has been literally turned upside down by art! Situated between Brittany and the Loire Valley, just 30 minutes from the ocean, Nantes is close to Paris (2 hours by high-speed TGV train) and other capitals of Europe (2 hours by plane). Nantes offers cultural and touristic activities with factories and warehouses transformed into cultural venues, the Castle of the dukes of Brittany, the newly restored arts museum, the summer festival “a Journey to Nantes” and the Grand Elephant of the Machines de l’île.

Every summer, Nantes gets a little more animated than usual with the festival “a Journey to Nantes,” coming to breathe in the air and atmosphere of the city becomes simply addictive! “A Journey to Nantes” does not only encourage art and culture in the city, but invites artists from all over the world to use Nantes as a playground for their creativity.

A journey to Nantes: an artistic trail in the city!

Follow the green line and enjoy a 10 km long itinerary with surprising installations from artists, great exhibitions and playgrounds. Something is sure: Nantes has become a phenomenon among all French cities.

Nantes is at the crossroads between the ocean and the land, of sweet and salty, of vegetable and animal, between Brittany and the Loire. Restaurants offer a great variety of fresh, healthy, locally produced vegetables and greens and priviledge local, bio and short-circuit productions, which make the area the most important area of France in terms of organic products. No stay in Nantes is complete without tasting original crêpes and galettes in one of the numerous crêperies Heb Ken, Le coin des crêpes…. 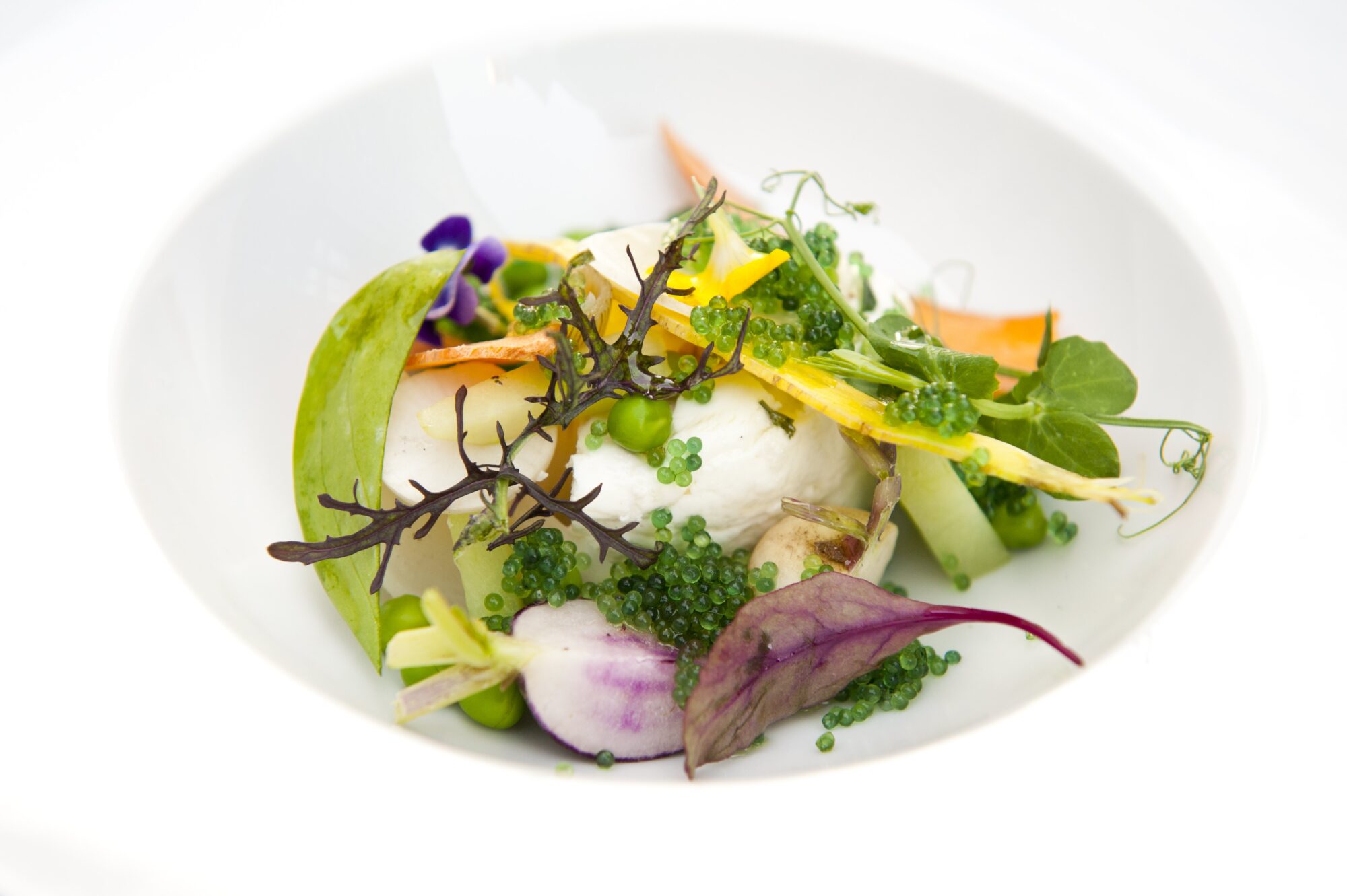 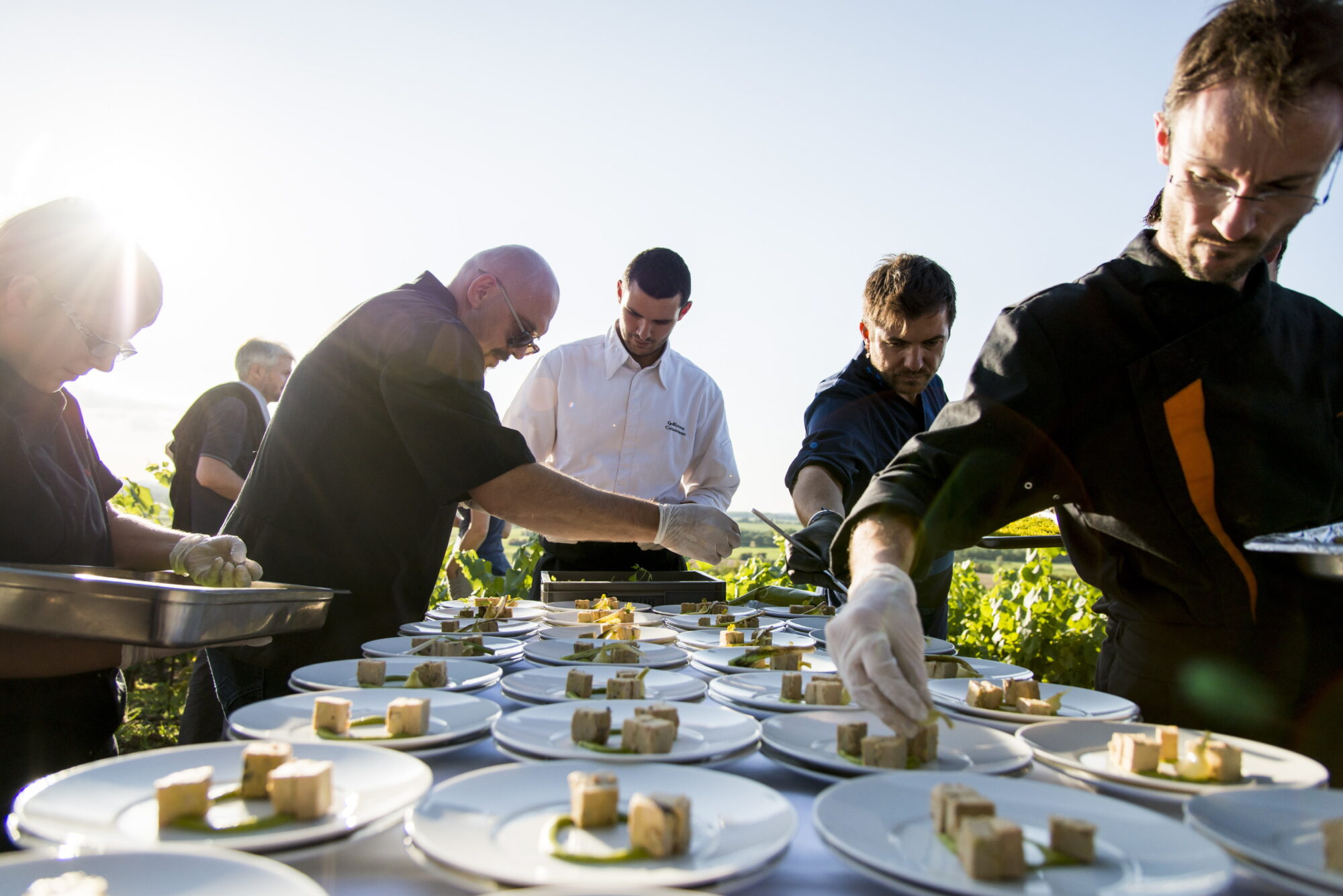 ‘The tables de Nantes’ is a guide to discover local cuisine and wines in restaurants chosen by a jury of passionate volunteers (designers, wine makers, graphic artists…). In total there are over 120 addresses, from good fast food to gourmet listed in Nantes, greater Nantes and the out-laying vineyards.

Visit the vineyards to taste the local Muscadet wine. 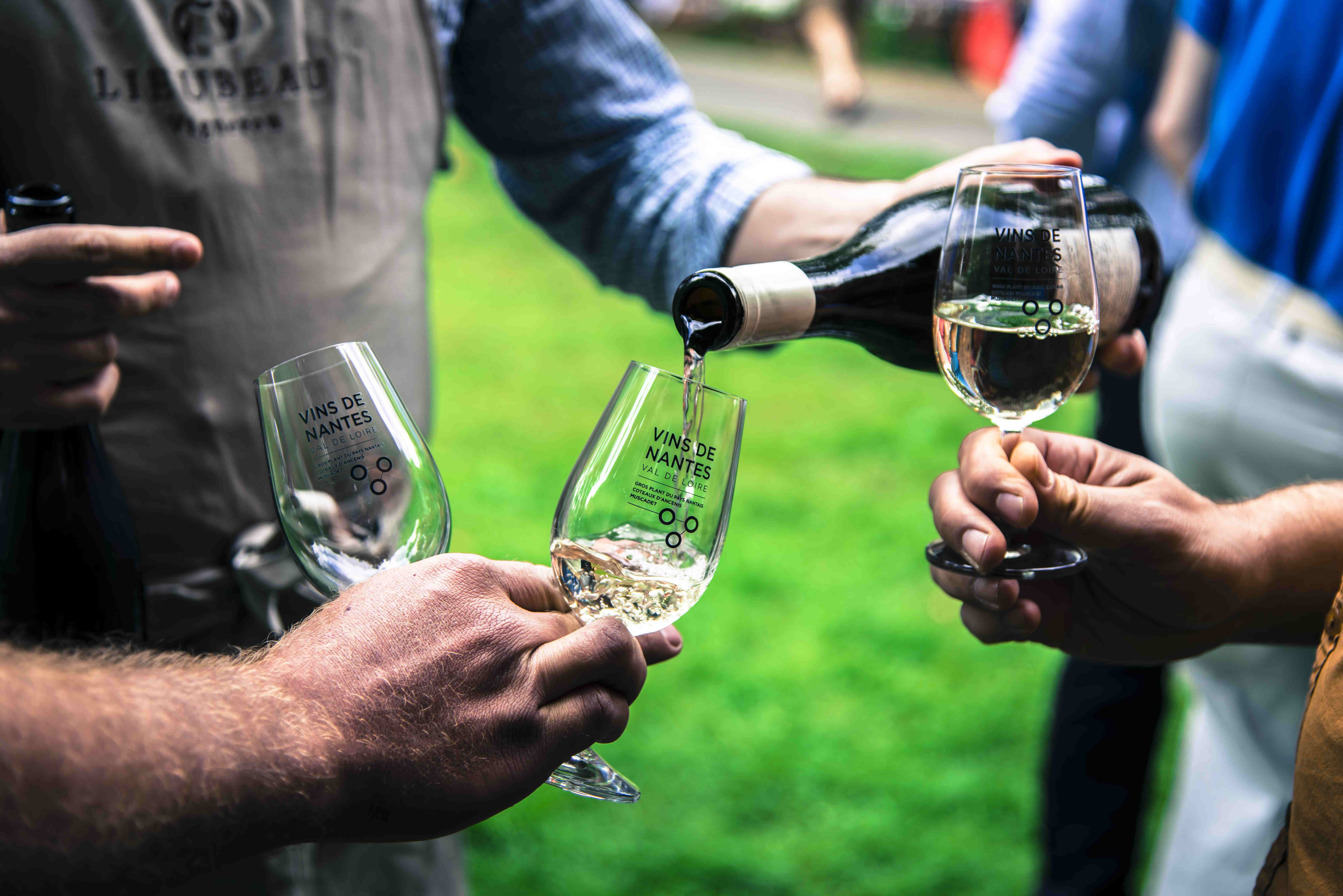 The excellent white wine Muscadet appears on wine lists in some of the finest restaurants and is exported to over 93 countries. Regionally certified Muscadet is found on the edge of the vale of the Loire vineyards, the 3rd largest wine producing area in France.

Nantes’ oldest and biggest market has become an institution in the town. It was opened on 8th January 1937. Its seafood and fish stands are particularly loved, though it is the mix of products that makes it really attractive: lobsters, prawns and crabs, market garden produce, white wine, cheese…

The Atlantide 1874 is the first starred restaurant in Nantes and considered to be one of the best in town. Chef Jean-Yves Gueho (Guide Michelin 2015 *) is well-known for creating innovative dishes, such as lobster salad with yellow wine sauce. The house overlooks the Loire thirty metres below and offers unparalleled panoramic views over the city.

Playgrounds designed by architects or artists, street furniture for a picnic with friends or relatives, terraces revamped by designers, petanque or table football on the banks of the Loire, welcoming lawns: Nantes definitely rocks! 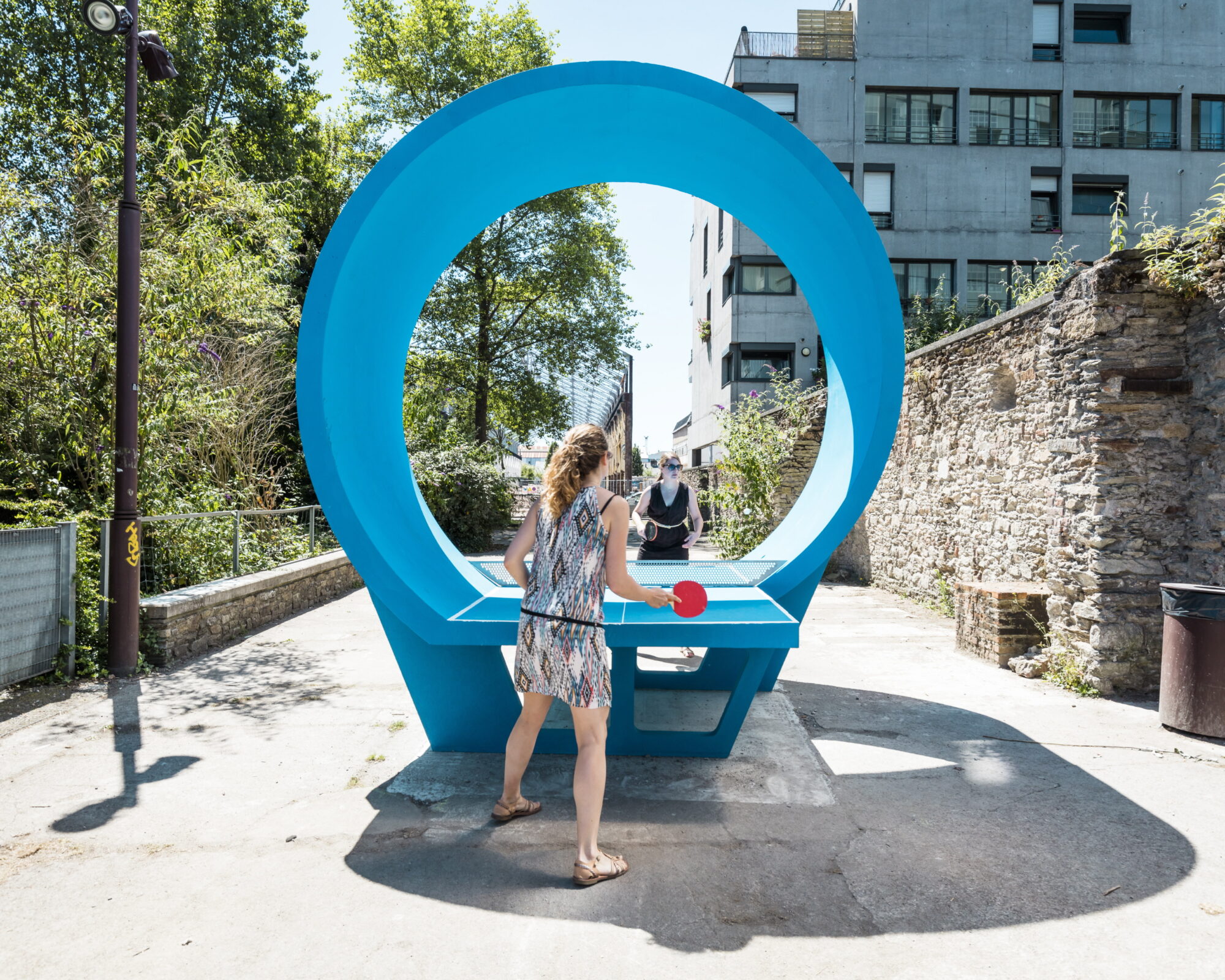 By following the green line let yourself drift from a work signed by a today’s great artist to a remarkable element of our heritage, from classic sites to unknown treasures, from a historic alleyway to a contemporary piece of architecture, from a surprising vista onto the city to a sunset on the Loire estuary!

The Voyage à Nantes does not only encourage art and culture in the city, but invites artists from all over the world to use Nantes as a playground for their creativity. Enjoy a 10 km long itinerary with surprising installations from artists, great exhibitions and playgrounds. No other city has an atmosphere as diverse as Nantes in the summer. 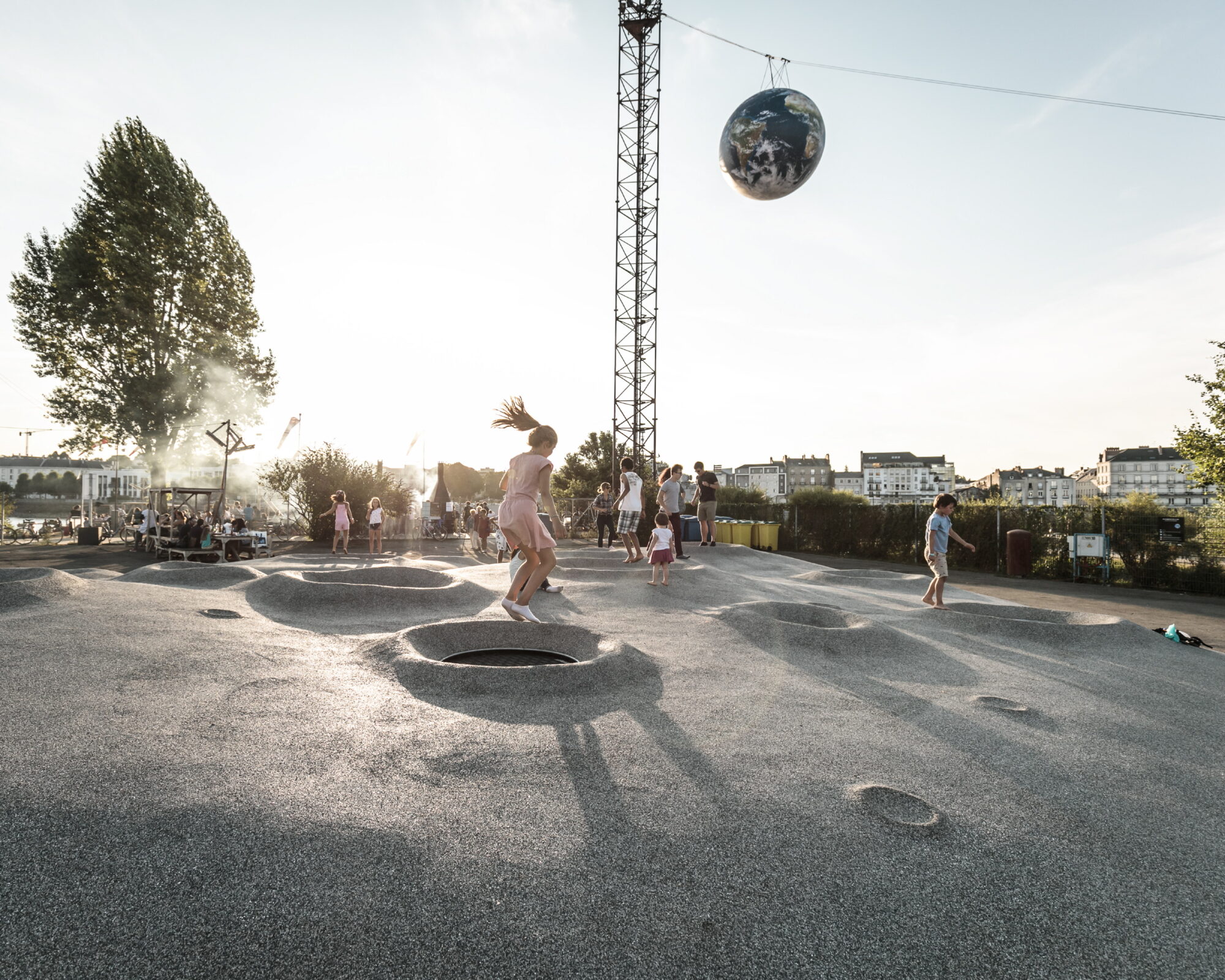 A totally unprecedented artistic project, which received the award for the most original attraction in the world. At the crossroads of Jules Verne’s « invented worlds », the mechanical universe of Leonardo da Vinci, and of Nantes’ industrial history, on the exceptional site of the former shipyards. 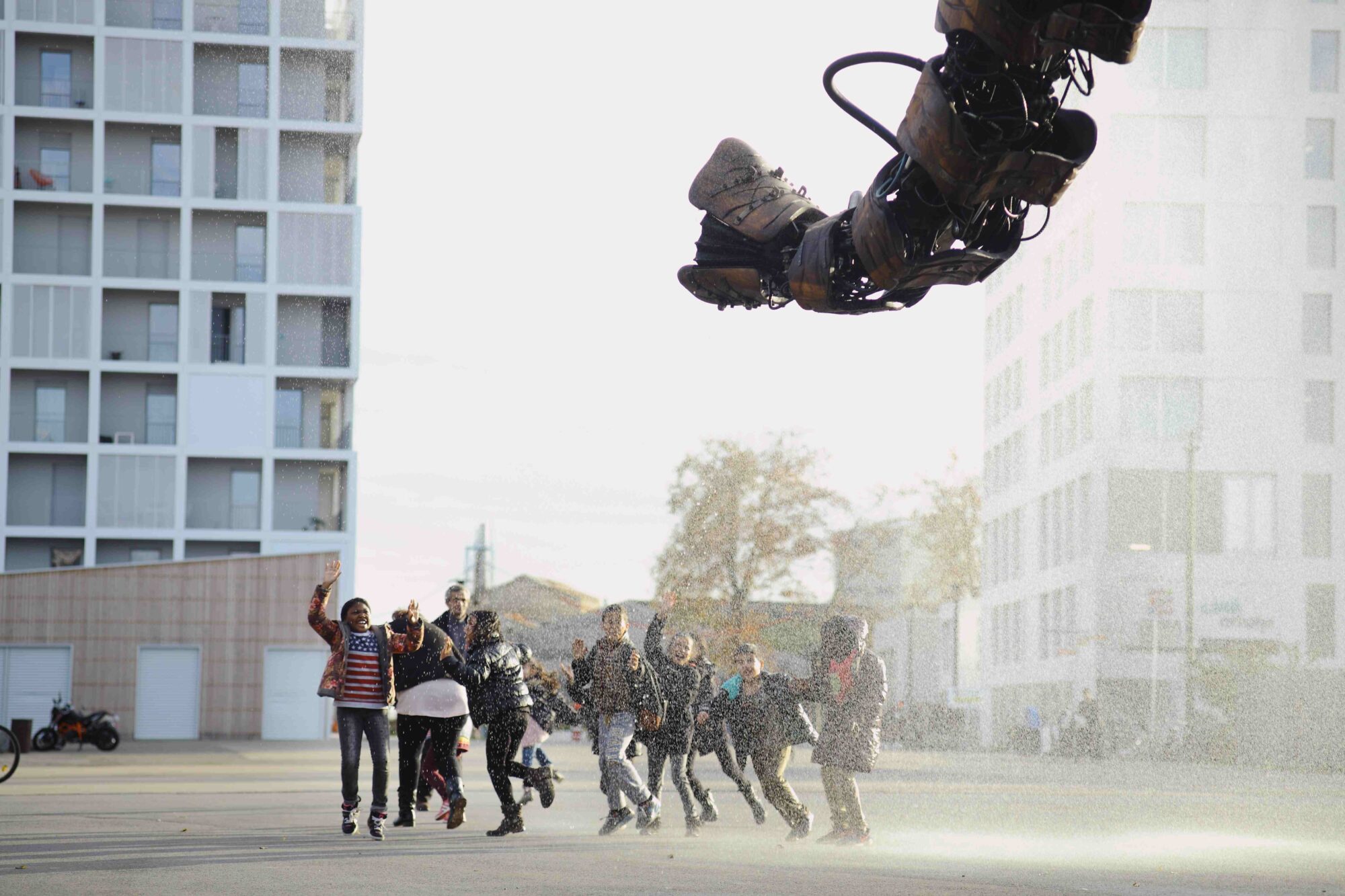 It is impossible to miss the Grand Éléphant as it walks along the quays of the Loire. It trumpets and squirts water from its trunk and if you dont’t know any better, you would say it is alive! This awesome ride is available all year round (except Jan-Early Feb). The Grand Éléphant links the Merry-Go-Round to the nave-like shipyard sheds at the heart of the Machines.

The Sea Worlds Merry-Go-Round is filled with creatures from the deep and is made up of 35 elements spread over 3 carousels; the depths, the abyss, and the surface of the sea. The visitors are spectators to the choreography of sea animals and marine carriages (giant squid, flying fish, storm boat, etc…) or they can climb aboard and take the wheel. This mammoth 360° theatre, set up on the quayside, is dedicated to the sea and far off lands that have been the stuff of dreams for the locals since the schooners first set sail to discover new and other worlds.

The Castle of the Dukes of Brittany

Just a few steps away from the Cathedral in the Medieval quarter, the Castle of the dukes of Brittany hides an elegant palace behind a robust fortress. Building started in the XVth century under François II, the last duke of an independent Brittany and was then continued by his daughter Anne of Brittany, twice Queen of France. This beautiful Renaissance inspired duchy residence, with its limestone facades sets the architectural tone for the mansion house and stately home Chateaux. 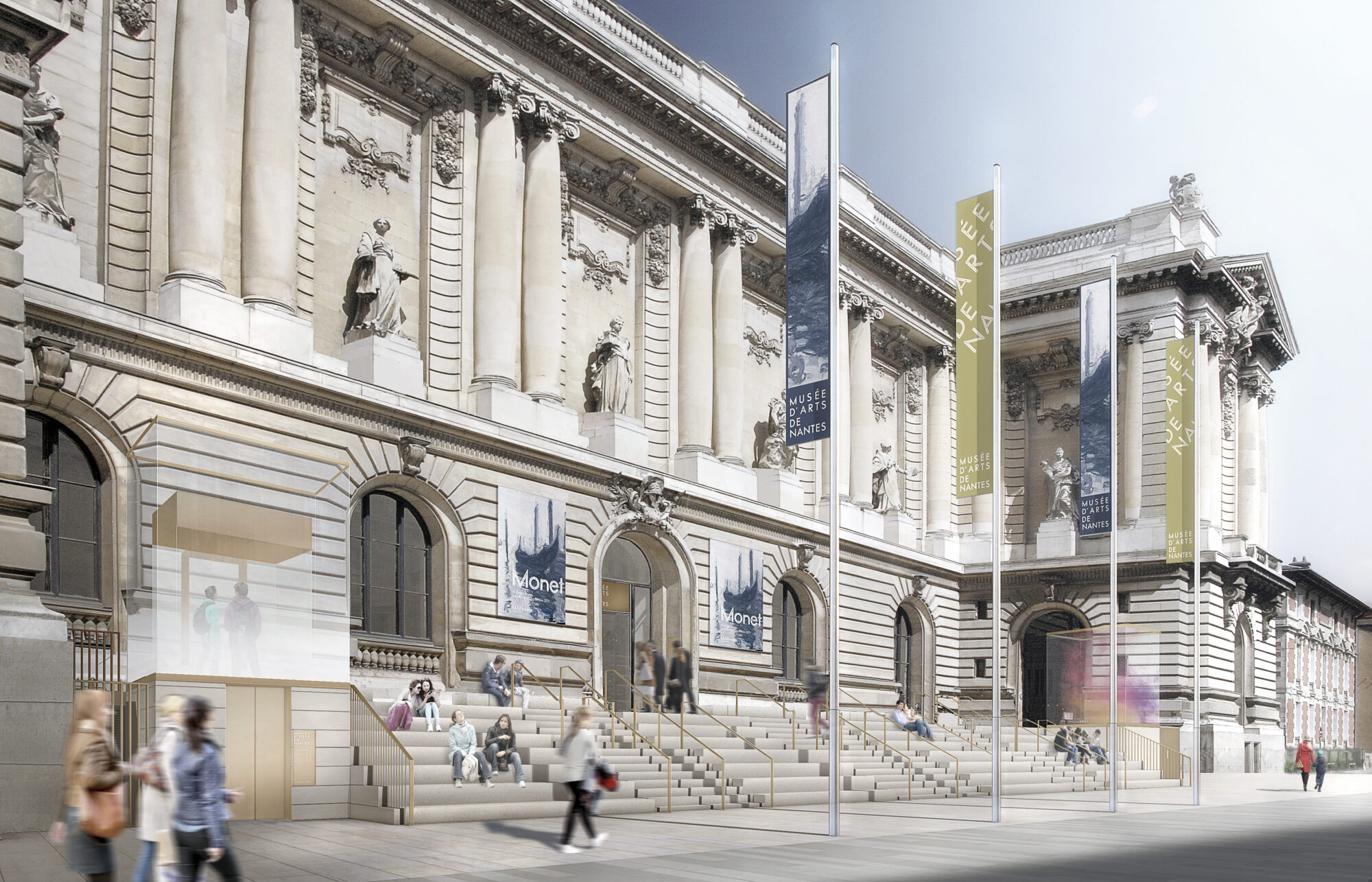 Often ranked as one of the top places to live, Nantes has over 1,000 hectares of green spaces. Parks, gardens and cultivated slipways have all multiplied. Outside the immediate area there are several places that really shouldn’t be missed during your stay here in Nantes. 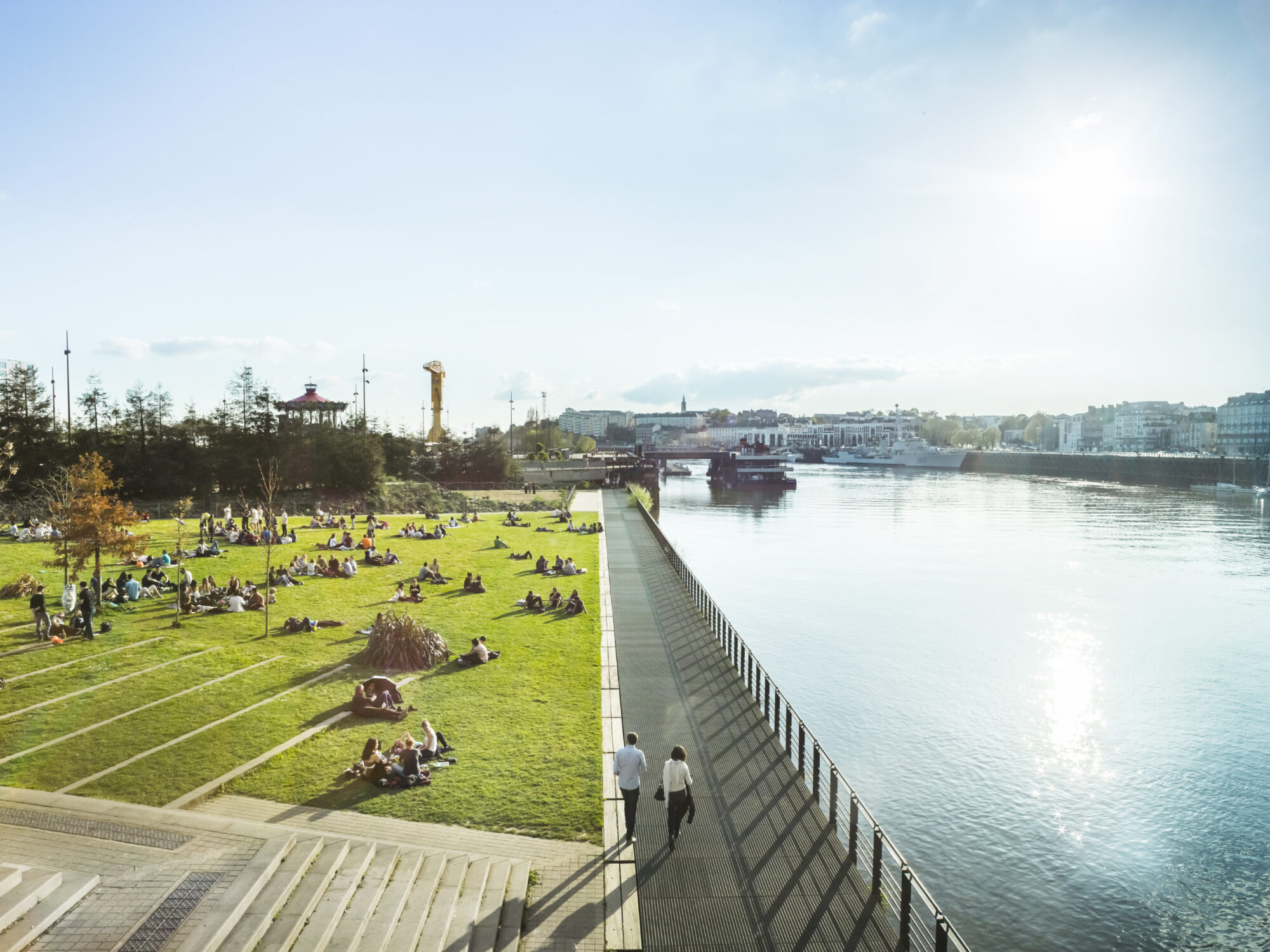 On the 32nd floor of the Brittany Tower (the highest tower between Paris and NYC!) come and relax with a drink and take in the stunning 360° views of the Greater Nantes area. “Le Nid” is the refuge of an immense white bird, part swan, part heron calmly keeping one sleepy eye on town below. The modern artist Jean Jullien created The Nest. 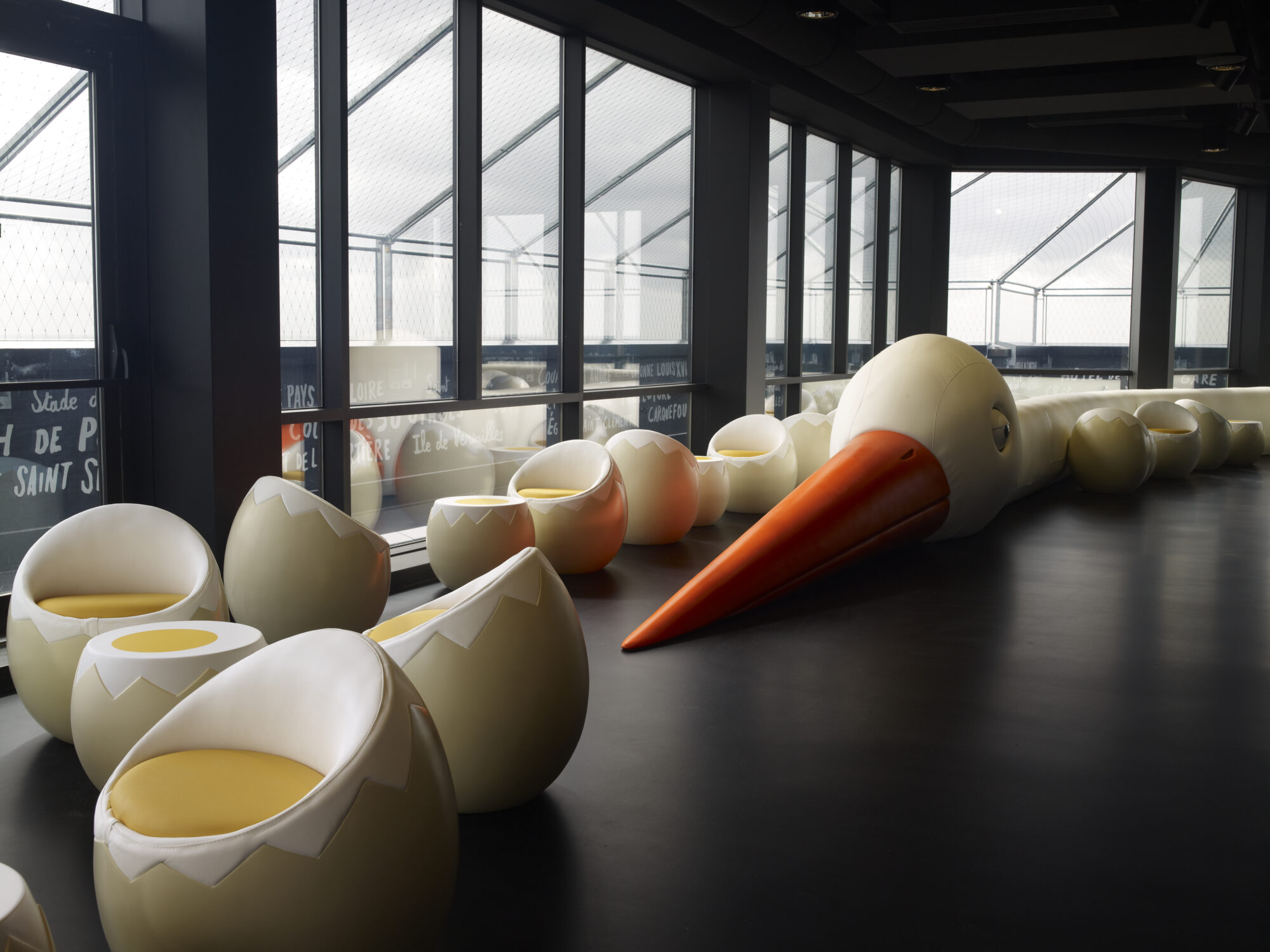 Close to the ocean, the vineyards stretch from the banks of the Loire in the north right down to the Vendée. Italian style architecture and rolling landscapes, red tiled roofs contrast the bright green of the vines planted right up the doorstep. 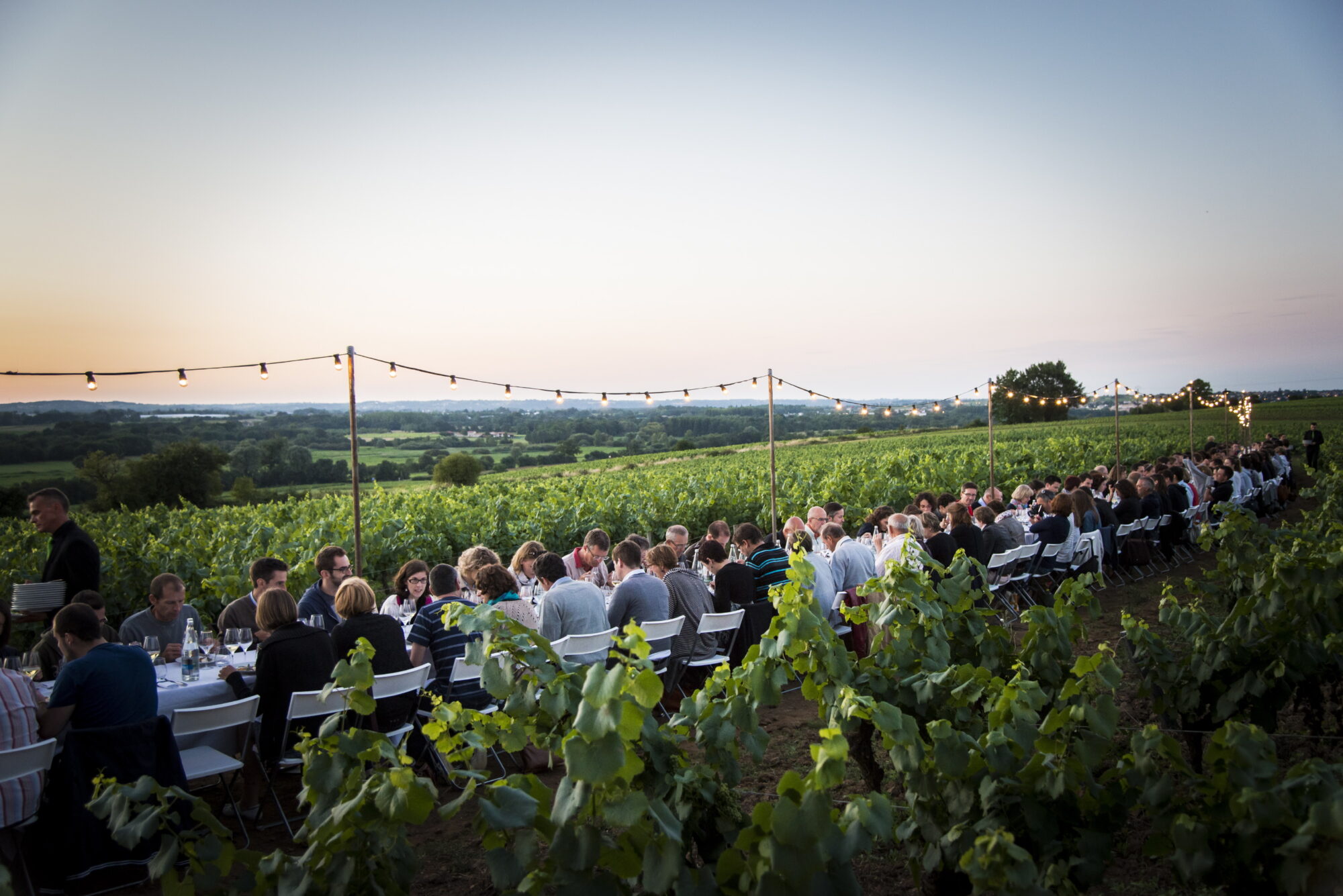 The 11,500 hectares of Muscadet vineyards cover the largest area in the Loire Valley. Because Muscadet is made from a single variety of grape it is the biggest certified white wine growing area of its kind anywhere in the world and Nantes is its capital. Crisp, light and fruity, the Muscadet wines make an ideal match for the local cuisine.

Set off from the town centre to see the 30 permanent installations of the “estuaire ” arts trail leading you all the way to the sea. You can get to all of the places on foot, by bike, by car and in summer by boat. In Nantes, Saint-Nazaire and on the 60kms of the Loire estuary that joins them together, this open-air museum will take you on a voyage of discovery through this fascinating land and the rich environmental heritage it holds. 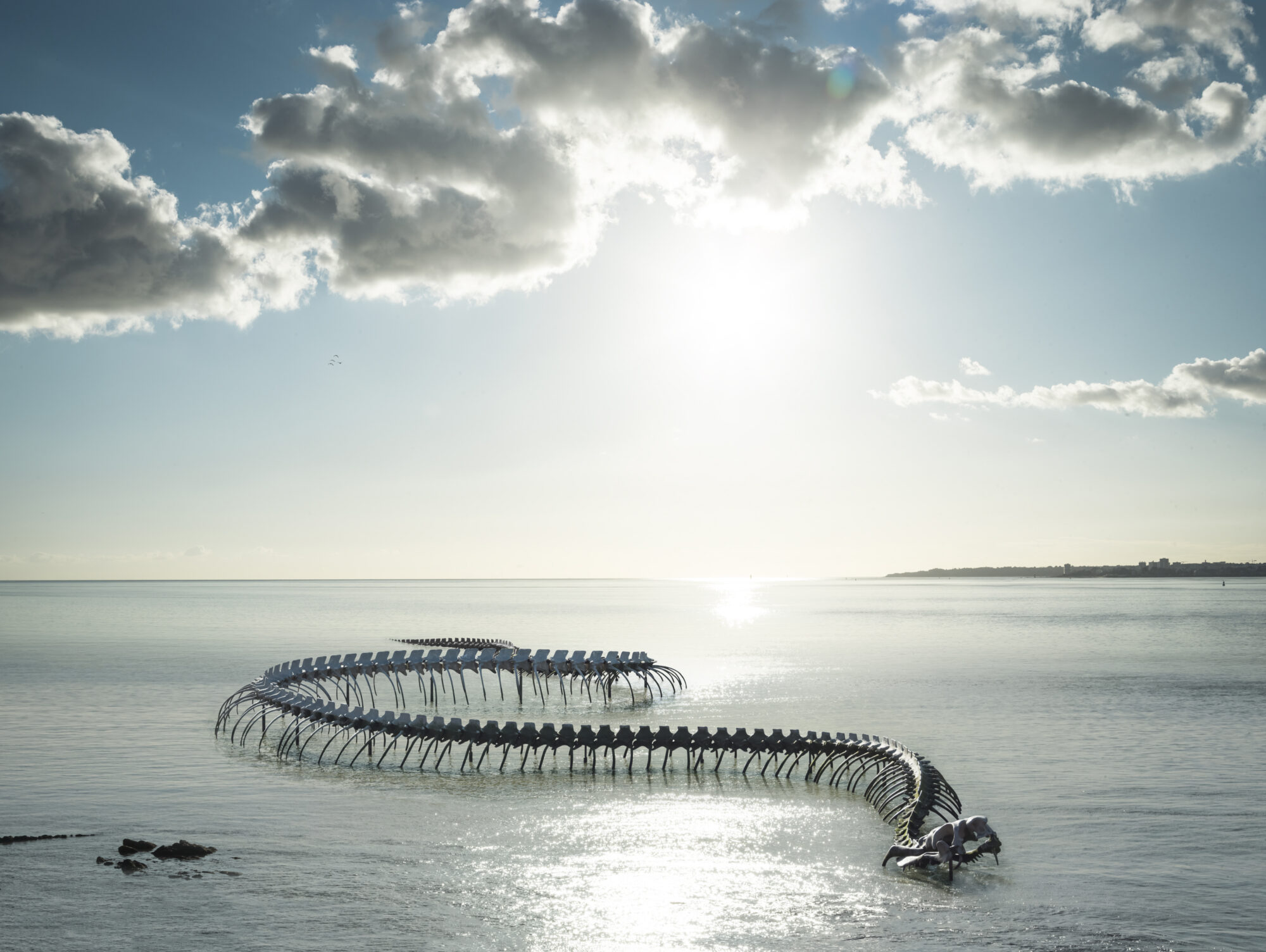 Set up in the former LU biscuit factory on 1st January 2000, the lieu unique is a venue of artistic exploration, a friendly cultural melting pot of mixed genres, cultures and people.

On the left bank of the estuary of the Loire, facing the port of Nantes, the charming fishing village of Trentemoult lives at its own pace. The narrow streets, brightly painted houses, old-style bars and patio tables are locked in a time of their own. Take an aimless amble, enjoy a meal, a drink or a chat with friends and watch the changing colours of the Loire at dusk.

A room dreamt up by artists, a cottage perched on top of a smokestack overlooking the Loire estuary, a former courthouse or a redesigned chapel… For all tastes and all budgets, Nantes and its surroundings offer a wide variety of accommodation: hotels, downtown flats, guest houses, creative or eco-friendly bed and breakfasts!

Nantes is an excellent destination packed full of great addresses. The favorites from the most chic to the most hair-raising are here. 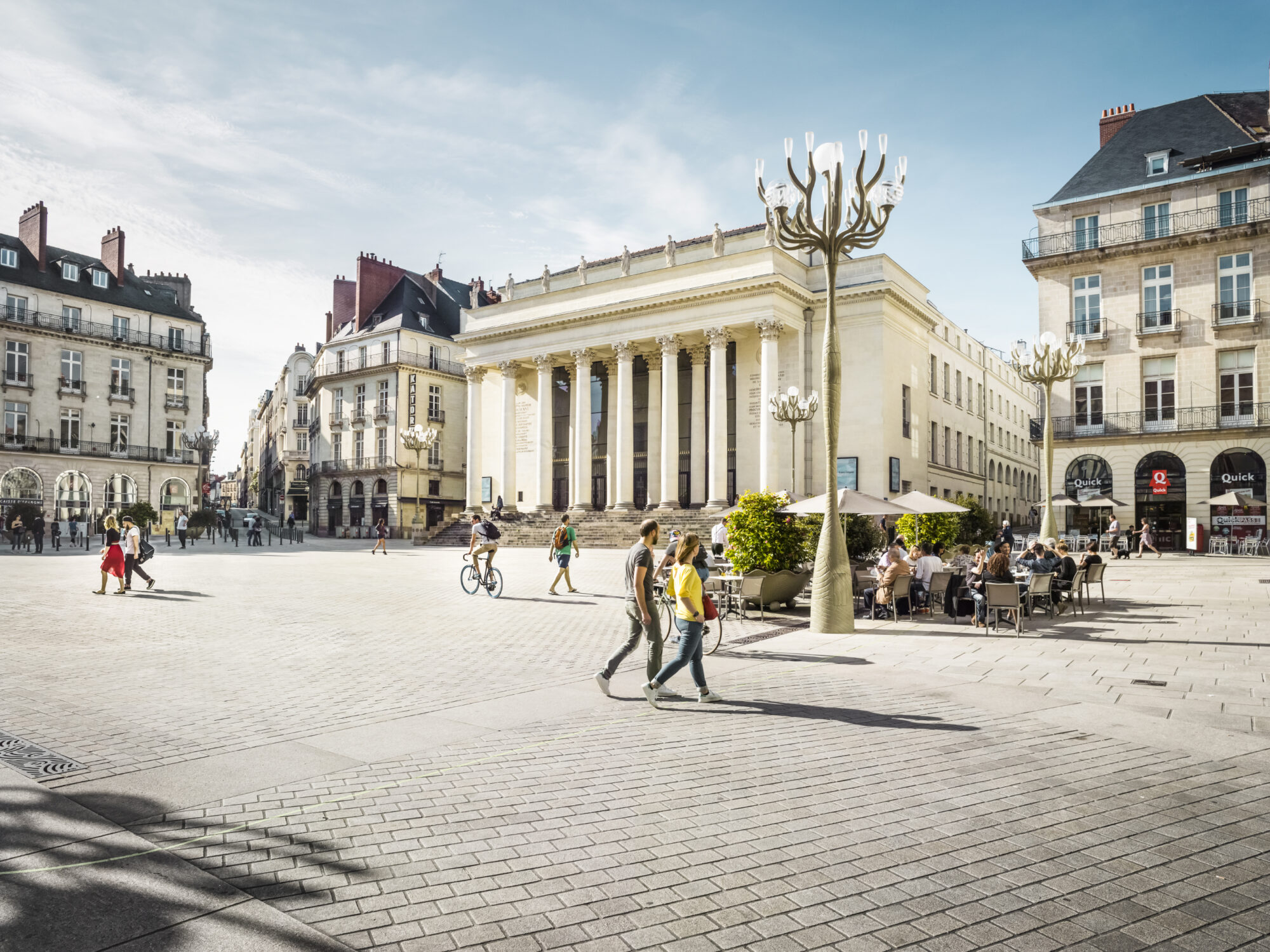 Sōzō Hotel is a 4-star design boutique-hotel in the city centre of Nantes. In a completely transformed and decorated 19th century chapel, the 28 rooms of the Sōzō Hotel offer a unique encounter between design and historical architecture.

The Radisson Blu Hotel, Nantes is housed in the 19th-century former Court of Justice building, the Palais de Justice. This attractive, classically designed building was constructed in 1851 and served as the Nantes Law Court until 2000. The hotel’s interior design combines traditional elements with contemporary, modern style and maintains many former features of the Court of Justice building, giving guests a glimpse into the building’s past. 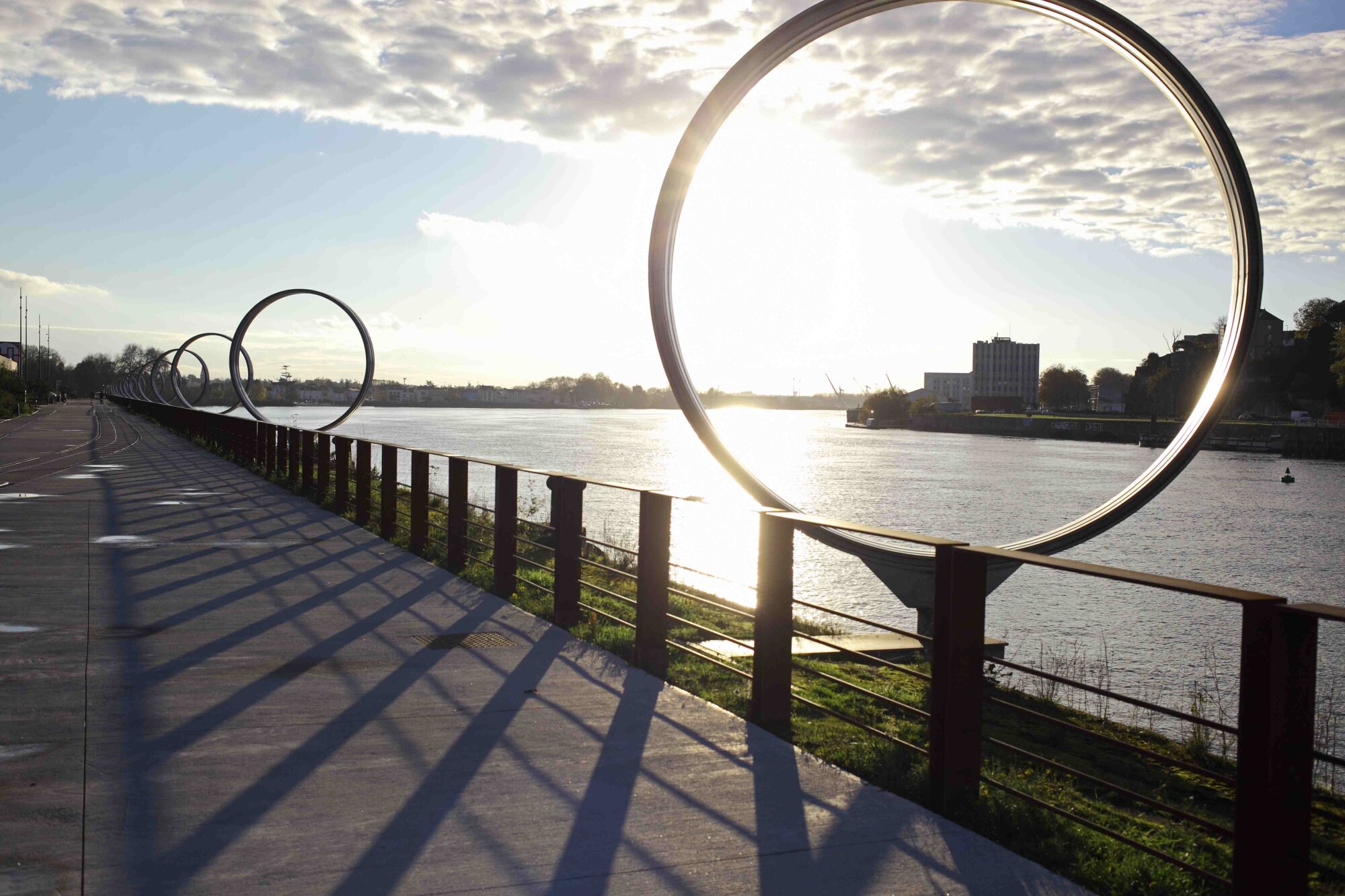 A hotel where you’ll feel right at home… Nantes Château is the OKKO HOTELS group’s first establishment. Ideally located in the centre of Nantes, this 4-star hotel offers 80 rooms. A stone’s throw from the Château des Ducs de Bretagne castle, this hotel is also only a 10-minute walk from the city’s train station There is no reception desk, no breakfast room, no lobby, no meeting room, no lounge but just one living space: the Club.

Nantes rarely goes to sleep at the end of the day. Night-time activities light up the town. Theatre or opera, cinema, concerts, dance shows or circus, night-time exhibitions, festivals and all sorts of events in and around Nantes sowing the seeds for an exciting night out.