Waterfalls are nature’s way of showing off, combining power and grace into one mesmerizing scene.

Whether it’s a thin stream pouring from a mountain in the clouds, or a rushing current beating the rocks with incredible force, every waterfall has its own way of drawing crowds.

Take a look here at 10 of the world’s biggest, most beautiful waterfalls that should be part of your next travel plans.

10 Of The World’s Most Stunning Waterfalls

Niagara Falls straddles the border between Canada and the US, and while it may not be the world’s highest waterfall, it’s actually the world’s largest. More water passes over these rocks than anywhere else in the world.

You can truly hear the power as two of the world’s largest lakes, Lake Ontario and Lake Erie, empty themselves over the sharp drops. Boat tours will bring you almost directly under the falls, where you’ll be soaked by the spray from these gushing falls.

Don’t worry, before sending you in they outfit you with a water resistant poncho that makes everyone look like a Smurf. You can take it home as a keepsake after the trip. 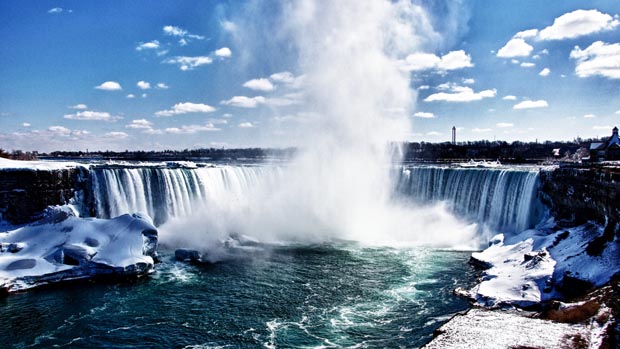 If heights terrify you, you’ll want to avoid a trip to Venezuela to check out Angel Falls, the highest waterfall in the world.

Nestled deep in the Venezuelan rainforest, this mystical table top mountain lets down a stream of water that falls uninterrupted for over 800 meters.

Its source is a mystery to some, who rightly point out that there is neither river nor lake at the top of Devil Mountain. Actually, the water for Angel Falls is collected from rainwater that seeps into cracks in the rock, where it collects in a huge reservoir under the mountain’s sky high surface.

This waterfall takes a bit of a trek to get to, but if you’re a believer in the phrase “life is about the journey, not the destination,” then you’ll be rewarded with views of lush jungle, riverboat memories with passengers turned friends, and a look at the graceful giant that is Angel Falls.

Choose your times wisely if you want to make this waterfall a part of your California adventure. It can sometimes be a bit shy.

Yosemite Falls, located inside the famous Yosemite National Park, doesn’t flow year round. But when it does, it’s one of the tallest in the world, with a stunning 2,425 foot vertical plummet.

The best time to visit is early spring, when winter run off makes for big falls. September and October are good months to come for cooler hiking weather, but don’t expect these rocks to give much more than a trickle. Reaching the falls is easy, unlike some of the others on this list, making it not only a favorite for Americans, but a much loved site for travelers around the world. 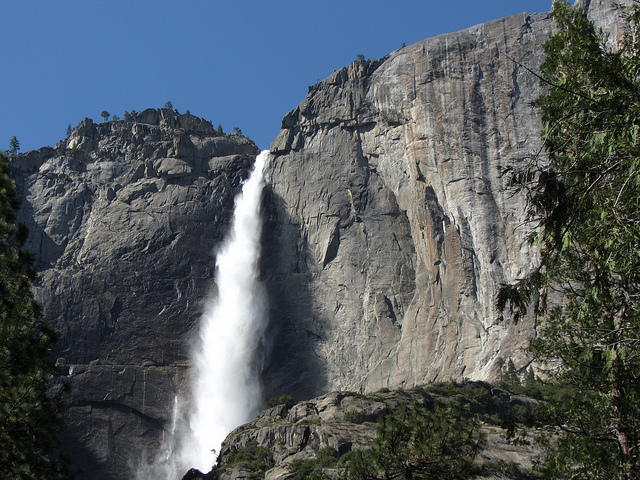 Another border hugger, this waterfall is smack in the middle of South America’s two largest nations, Brazil and Argentina, and stretches for an incredible 2 km of sheer vertical drop.

This isn’t actually one waterfall, but a series of hundreds of smaller falls all rolled into one, making for a jaw dropping scene of never ending streams rushing over the cliff. Cat walks along the river’s edge mean you can get close enough to feel the mist from the falls. Jungle scenery bordering Iguazu makes it feel like a tropical paradise of Lost World proportions.

There’s a local legend about these falls. Story goes that a deity planned to marry his love, but she had eyes for another. When she fled with her new man, the deity flew into a rage and sliced the river, creating the eternal Iguazu Falls. 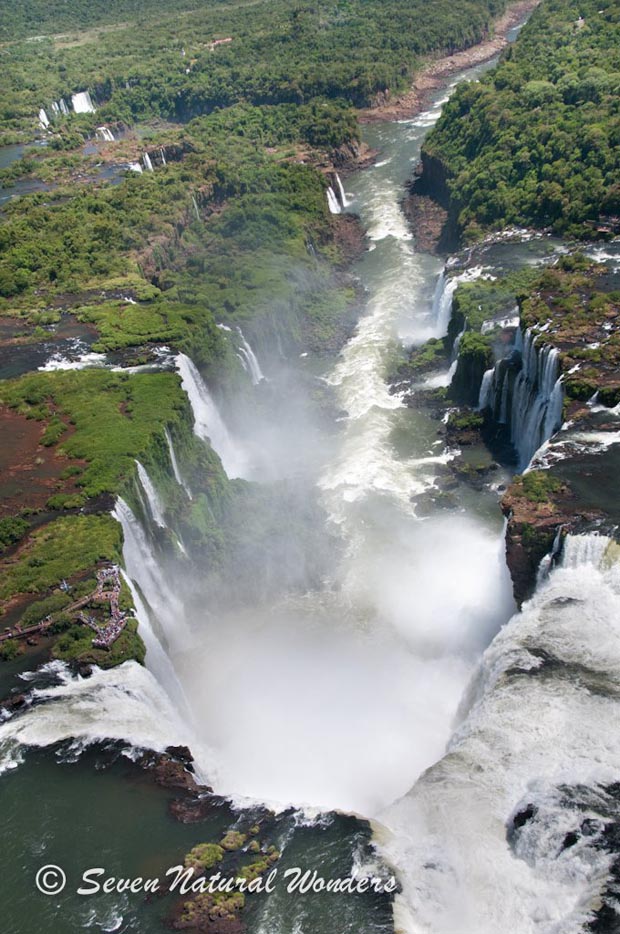 Journey along the Zambezi River through the south of Africa, and you will be rewarded with a front row seat to one of nature’s most breathtaking displays of power.

Victoria Falls is so large it competes with Niagara and Iguazu for the most gallons of water falling per second. So much mist is created by this nearly 100 meter fall that it appears to be hidden by a cloud, giving it the nickname, “the smoke that thunders.”

While it might not be the easiest waterfall to see, the occasional rainbows that form in its mist, along with its sheer power, make it one of the world’s most memorable. Perhaps you’d be better off taking a ride in a helicopter, so you can witness the falls from above. 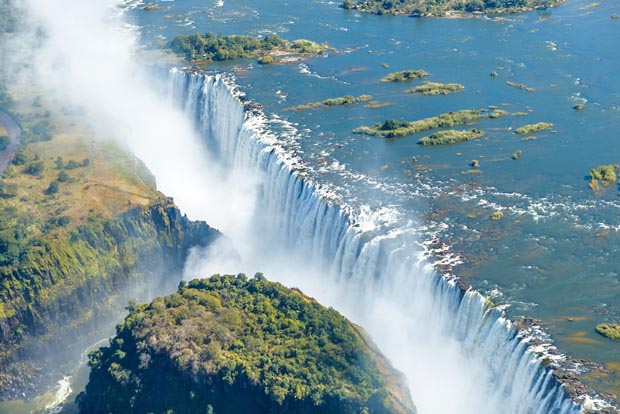 Courtesy of Vadim Petrakov via Shutterstock

A trip to Iceland is like a trip to another planet, where nature shows off all its wonder through magnificent rock formations, epic hot springs, and of course, giant waterfalls.

Enter Gullfloss, a spraying behemoth that falls in two tiers, each sitting at opposite 90 degree angles like a set of giant steps leading up through the river. We don’t recommend swimming, since the icy waters of the Hvita River actually flow down from a glacial lake. The waterfall is an essential part of Iceland’s Golden Circle of key destinations, and a popular day trip for visitors.

Stories are told of lovers separated by the impassable falls, who communicated through rocks they threw across the river. The band Live actually made a music video based on this tale, where the lovers are united in the end by jumping into the river. It’s questionable whether they lived happily ever after though, so if at all possible, we recommend finding romance on your side of the river. 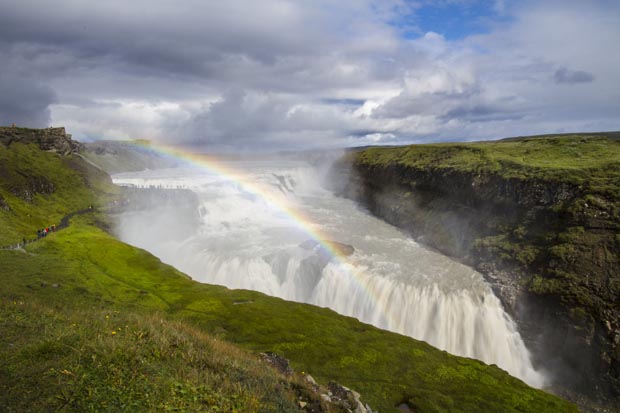 While many of New Zealand’s falls are tucked away in the difficult to reach backcountry, the best New Zealand has to offer is waiting right at the front door.

Well, at least in comparison to the others. While you’ll still need to hike to get their, Sutherland Falls on New Zealand’s South Island is a 580m waterfall that is worth the trip out of town. Three separate drops give Sutherland Falls its distinct character, with triple the opportunities to witness its power and grace.

If you can somehow get an aerial view, the snow capped mountains huddled around this gorgeous three tiered waterfall are something you won’t soon forget. 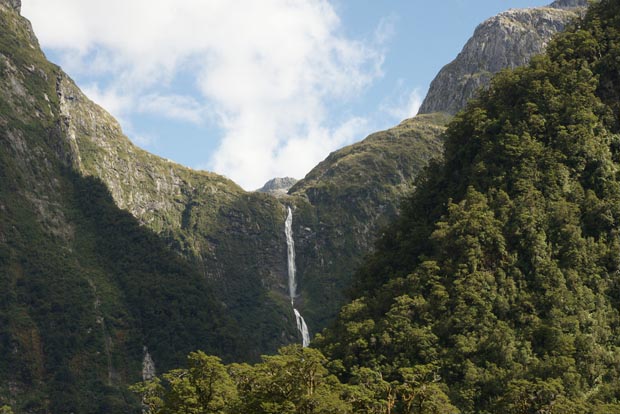 Oregon might as well be renamed the Waterfall State. With more waterfalls per square mile than anywhere else in America, jaw dropping sites are a daily occurrence.

But with its abrupt 620 ft drop and a surrounding canyon of lush trees and mossy rocks, Multnomah Falls is truly something special. The water here falls in a silky stream into the Colombia River Gorge, with a background that offers a different character for every season. Come in the summer for a forest full of atmosphere and mist, or in the fall when the forest is set ablaze by orange and red leaves.

The bridge reaching over the first tier of the falls is the icing on the cake, tying the whole scene into one postcard perfect image. Just be sure to go early, as you won’t be the only one looking for a front row seat to one of nature’s greatest shows. 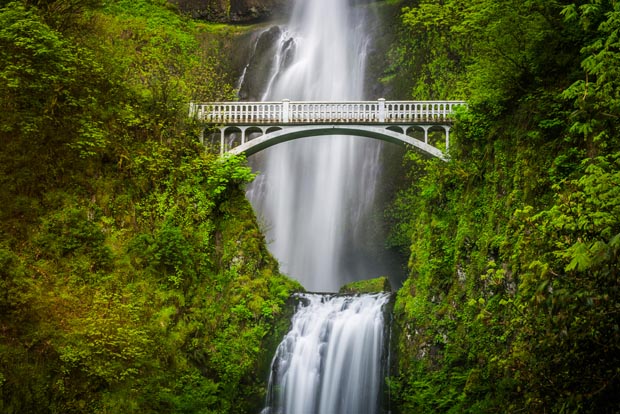 Sometimes it’s not about being the loudest or the biggest. Sometimes a scene can impress us with its quiet elegance, like Kuang Si Falls in Laos.

In a country nicknamed “the land of waterfalls,” Kuang Si is the star attraction. Multiple tiers of clear blue pools give this place an almost fairy-tale allure. The walk up to the falls is just as enjoyable as finally seeing them in all their glory, and taking frequent dips in the many different levels is part of the trip.

When you do finally arrive, it’s an awe-inspiring glimpse at a tropical waterfall that delivers on its promise of exotic beauty. Go during the winter months, when the waters are at their bluest, and the weather in Laos is so hot that a swim in the pools will be just what you need. 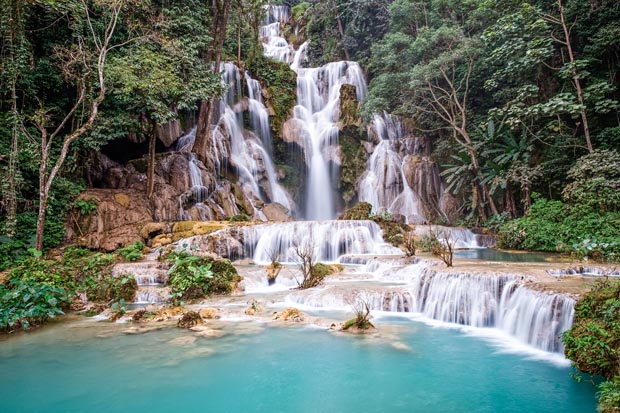 Plitvice Park in Croatia is so beautiful, it’s currently experiencing a tourism crisis. Selfie-taking tourists have overwhelmed the park, veering off of designated paths and doing damage to the area’s fragile ecosystem… and themselves.

With over 15,000 visitors a day, accidents are bound to happen. A 20-year-old Canadian man recently fell 75 metres while trying to take a selfie. Tree branches miraculously cushioned his fall, but a Slovakian tourist wasn’t so lucky. Park Authorities are reminding visitors that while having the best selfie background is important, dying in Croatia before you can hit the Share button would be tragic.

This place is truly of storybook beauty, with soft hills of green giving way to gracefully descending falls. Surrounding the blue lakes that form these falls, rocky peaks reach towards the sky covered in a thick blanket of lush forest. Be honest, you’d probably take a selfie too.