A city by the ocean is the best of both worlds, offering all the culture and excitement of a metropolitan, with beach and waterfront activities right on your doorstep. There’s no reason you can’t have the beach and live in a city, too. If you’re looking for the comforts of city life but love the ocean too much to move inland, take a look at these eight cities that are right on the beach.

8 Places Where You Can Have The Beach And City, Too

Barcelona has a culture all its own, offering miles of stunning beaches on a backdrop of towering gothic cathedrals and all-night clubs.

The city is alive with artists, their talents evident in the imaginative architecture, and street art murals covering so many buildings. First class tapas bars and cheap, abundant wine fuel the never-ending celebration that is Catalonia’s landmark city.

Take a subway to the nearest beach, where you’ll find flocks of tourists sunning by day and partying on the waterfront by night. If you’re looking for a quieter experience of the Mediterranean, a 20-minute train ride will get you the same quality beach with a quarter of the people. Clothing is always optional, of course. 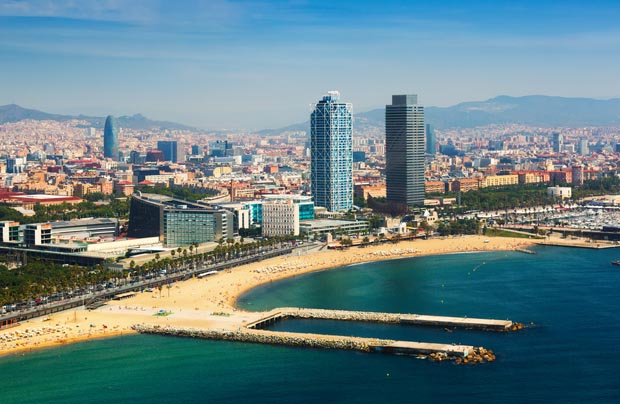 Courtesy of Yakov Fillimonov via Shutterstock

Hawaii’s largest city is also its most diverse. The island’s past still whispers through this boisterous capital, where ocean breezes meet an energetic city full of history and incredible food.

Looking to relax? Leave the concrete jungle for Waikiki beach to find miles of soft sand separating glistening hotels from an ocean spotted by sailboats.

Take surf lessons from a tanned beach boy, then order a margarita and dip your feet in the white powder. Refuse to get up from your beach throne until the smell of Hawaiian barbecue, accented with pineapples and a mix of local spices, lures you to one of many beach front eateries.

When night falls, head off to a nearby island, put a cold drink in your hand, and let your ears be guided by the mellow charms of a slack key guitar. Find a seat overlooking the water and ask yourself if you really need to go home after all. 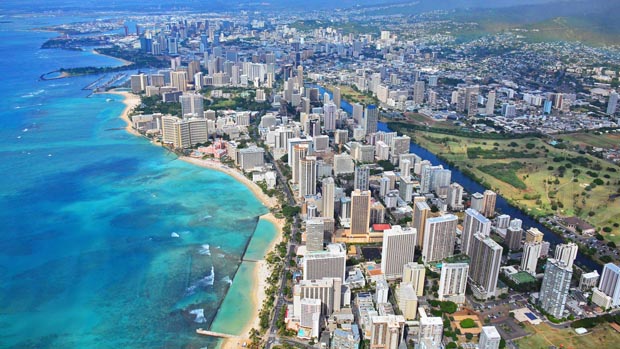 Most of them offer great views of the Vancouver skyline, backed by tree covered slopes and snow-capped mountains. The most glamorous is Kitsilano Beach, known affectionately by locals as “Kits.” This is where you’ll find athletic types perfecting their spike at a beach volleyball court, or relaxing on a towel, perfecting their tan.

Other beaches in Vancouver deliver their mix of ocean-side activities, from sailing and cycling to lounging at restaurants swept by the ocean breeze.

Downtown you’ll find well-groomed business people brushing elbows with salty haired outdoors types. This is one of North America’s most culturally diverse cities, teeming with foods and festivities from all over the world. 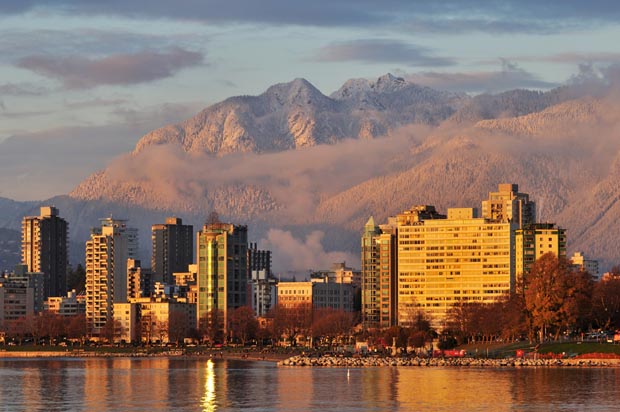 Courtesy of Lijuan Guo via Shutterstock

Los Angeles is a city with its arms wide open, beckoning anyone with a dream to come share some space within its legendary borders. It’s a city alive with ambition, where your cocktail waitress likely has an audition after her shift, and the guy at the next table just launched a software startup.

Venice Beach is a people watcher’s paradise. Larger than life body builders pose for magazine covers at outdoor gyms, while skateboarders launch themselves through the air in the place where the sport was born. It’s 7 miles of golden beach lined with seasoned surf shops, artists selling handmade crafts, and performers wowing audiences for their pocket change.

Rent a pair of roller blades and roll the day away while sipping from a fresh coconut. Or you can dig yourself a spot in the sand, and watch it all go down to the rhythm of a nearby drum circle. 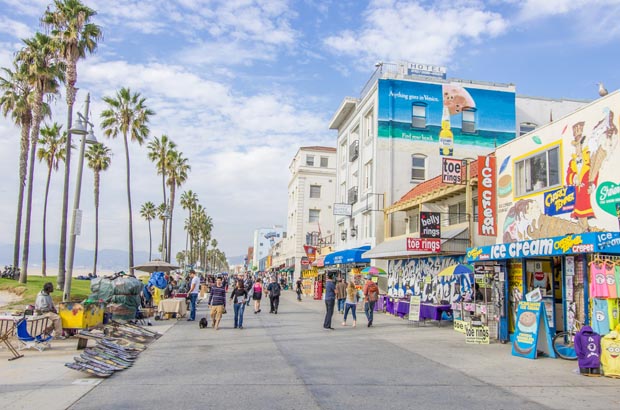 Courtesy of oneinchpunch via Shutterstock

Energetic Rio, known among some Brazilians as the “Marvelous City,” is surrounded by cinematic landscapes.

On one side you have miles of soft sandy beach, speckled with locals and travelers sipping crushed ice cocktails and playing games of soccer that last until sundown. Turn around, and you’ll see a rugged mountain ridge peaking out from the lush green jungle.

And in the middle of all this natural beauty is a city pulsing with music, the diverse mix of samba, old-school bossa nova, and Brazilin funk that give Rio its signature sound. No city celebrates quite like Rio, the home of dazzling Carnaval, where costumed dancers take to the streets for a 5-day party not matched anywhere in the world.

Hosting the Olympics this year added new fuel to this city’s already bright fire, putting Brazil on the map in a whole new way. 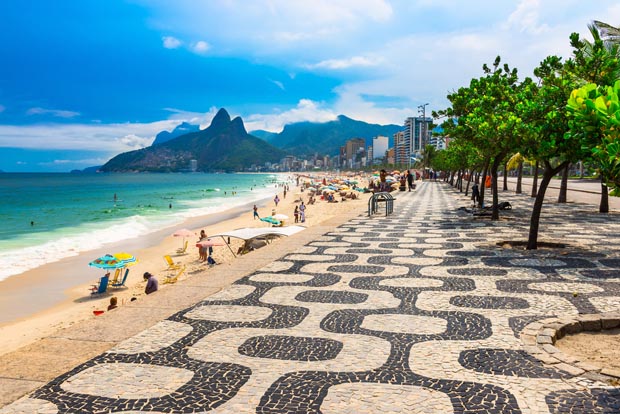 Courtesy of Catarina Belova via Shutterstock

The city where America goes to play. Miami wears its Latin influences and ambitious attitude proudly.

Skyscrapers made of glass and sunshine line the streets of this southern city, attracting everyone from high profile celebrities to road tripping families. Take a walk through Little Havana, where sounds of salsa music mix with the fiery smell of re-fried beans wafting into the streets.

A trip to South Beach is a must, where the sugary sand gives a warm invitation to swim, sea-doo, and watch pretty people stroll by. After that, make time to rent a boat and explore the mangroves and sand bars of the Florida Keys.

If you can keep up with the nightlife, this city has a hard-earned reputation for partying with more glamor than anywhere else in America. 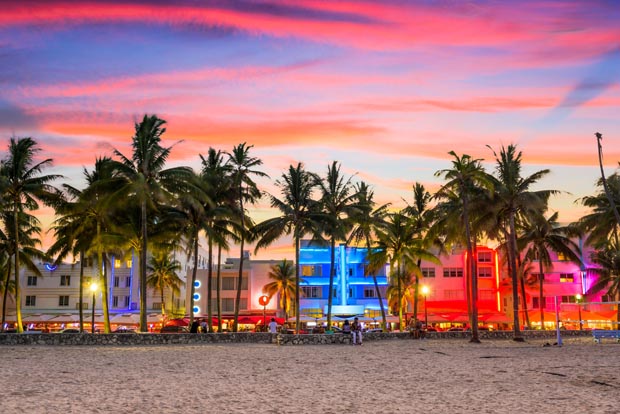 Courtesy of Sean Pavone via Shutterstock

Korea’s largest coastal city is the fifth busiest seaport in the world, and quickly becoming one of Asia’s favorite beach towns.

Busan is a city where mountains truly meet the sea, allowing you to spend your morning hiking to temples and lookout points, and the afternoon lounging in the sand at one of the city’s five beaches.

The smell of fresh seafood is never far off, beckoning you to try the city’s signature delicacy sannakji, octopus tentacles that are still wriggling when you eat them. When evening rolls around, it’s best to find a bar along Gwanganli Beach, where you can see the iconic Diamond Bridge all lit up. Sit back and watch buskers draw a crowd with songs and dance, showing off the talent of this country’s excitable youth. 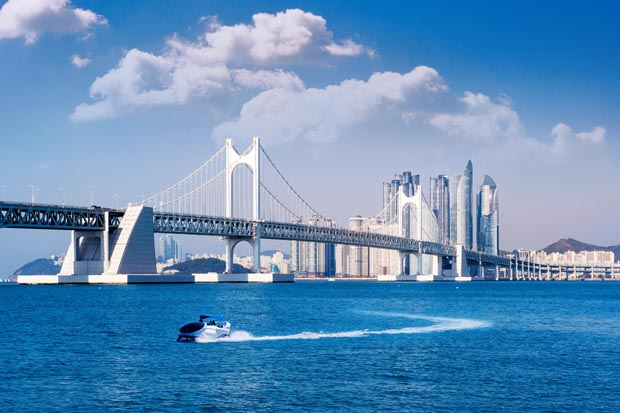 Courtesy of Guitar Photographer via Shutterstock

Sydney is Australia’s loudest and proudest city, boasting brighter fireworks, higher heels, and bolder chefs than all the rest of the Down Under.

It’s also home to some of the world’s best surf, with miles of golden coast for the taking. The city is surrounded by national parks, meaning it’s not unusual to find critters like tree frogs, bats, and even water dragons roaming the streets or flying overhead at sundown.

Sydney’s nightlife promises to keep you on your toes with new restaurants opening nightly, along with bars to discover, bands to take in, and Opera House nights to fill your calendar. 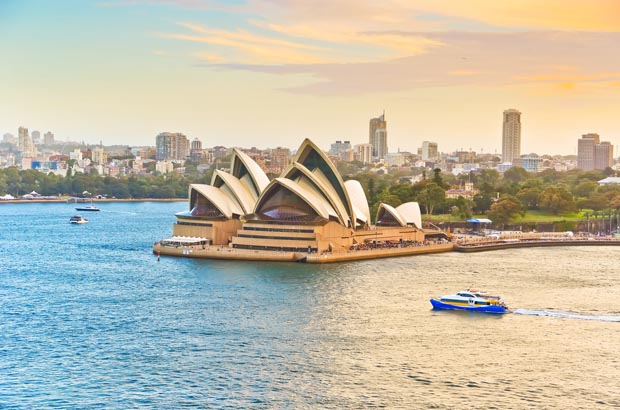 Courtesy of Javen via Shutterstock

There’s no need to choose between the beach and the city when all these places offer both. Now the only choice to make is, where to?