Osakan food is from Osaka, Japan’s second largest city, and is famous for its delicious takes on famous Japanese dishes, and its mouthwatering originals. The city is so famous, in fact, that it’s even earned the title of the “nation’s kitchen” (天下の台所 tenka no daidokoro)!

The food scene in Osaka isn’t only great by Japanese standards, either. It’s world class! In Osaka alone, you’ll find 89 restaurants with at least one Michelin star. Osaka’s restaurants are some of the best you’ll find anywhere in the world, so, naturally, no visit to Osaka can be complete without first sampling at least some of the tasty treats it has to offer.

Japan’s food capital has something to taste for everyone, and even those without an affinity for fish (one of Japan’s staple foods) will be delighted by Osaka’s famous konamono, or, in other words, flour-based dishes like okonomiyaki, and its tasty sweets.

This list is by no means exhaustive, but if you’re new to the wonderful world of Japanese food, or a hardcore foodie looking for something new to take a bite of, hopefully this guide can point you in the right direction.

From Will Fly For Food 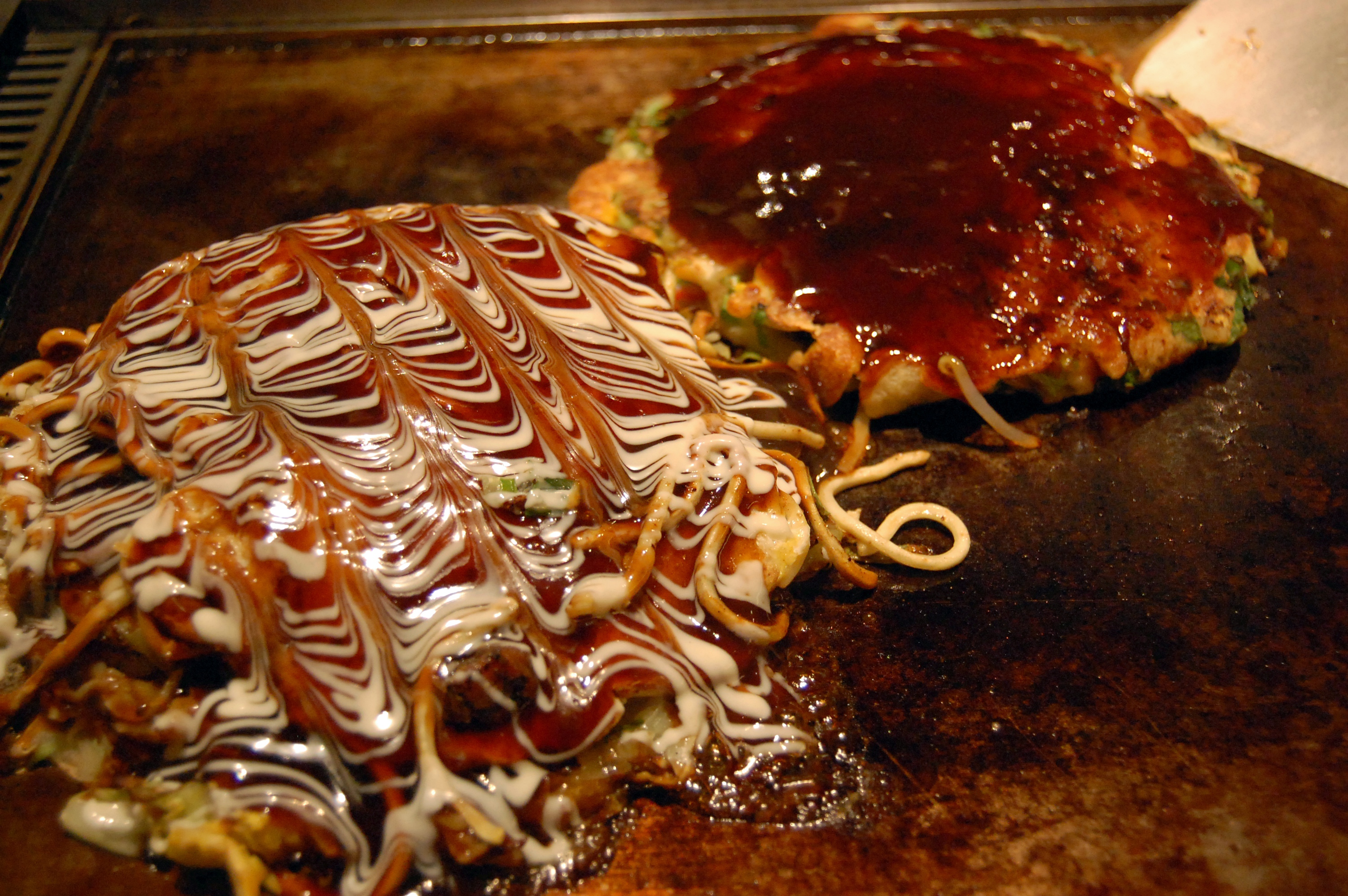 A popular Osakan dish, okonomiyaki is a savory pancake containing a variety of ingredients like green onion, pork belly, octopus, squid, shrimp, vegetables, mochi, and cheese. A trip to Osaka wouldn’t be complete without trying this. 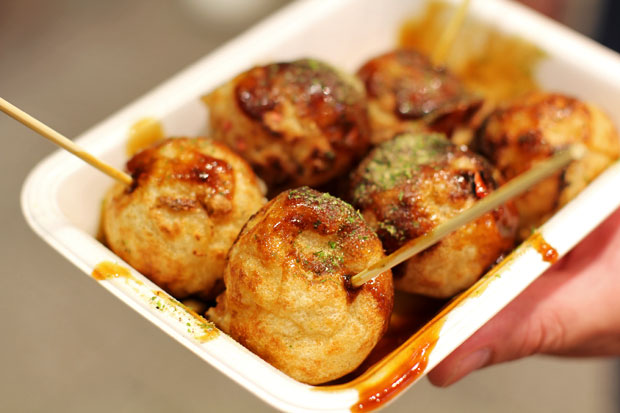 Together with okonomiyaki, takoyaki is arguably the most iconic Osakan dish. A popular ball-shaped Japanese snack, takoyaki is made with a wheat-flour-based batter and filled with diced octopus, tempura scraps, pickled ginger, and green onion. It’s then brushed with takoyaki sauce and mayonnaise before being sprinkled with green laver and shavings of dried bonito. 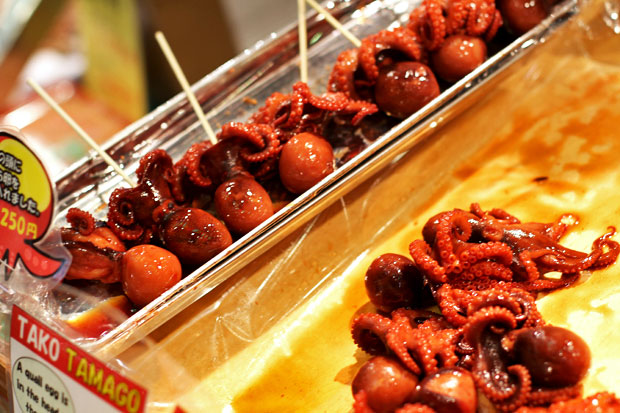 Ubiquitous as street food, these glazed baby octopusus have whole quail eggs stuffed in their heads. Tender, delicious, and inexpensive, you can snack on these eight-legged eggheads at Kuromon Ichiba Market. 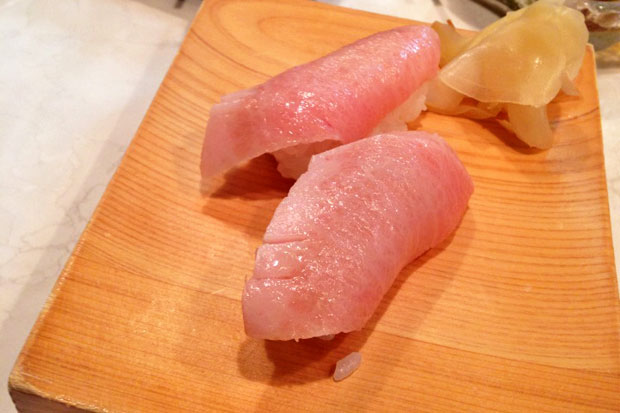 One of the choicest pieces of sushi that you will ever eat, otoro is made from the fattiest part of the tuna. It truly is melt-in-your-mouth delicious and will have you closing your eyes and smacking the table with delight.

Costing an arm and a leg anywhere else in the world, otoro can be had for cheap in Osaka. It’s even sold as street food at Kuromon Ichiba Market!

As you make your way through Dōtonbori (one of Osaka’s most beautiful and popular tourist destinations) slowly enjoying some piping-hot takoyaki, you may think to yourself: I love this so much. I wish I could eat this forever. I might just turn around and get some more. How is it so chewy and delicious? What’s happening to me…

But don’t get ahead of yourself! There’s nothing in the world like some fresh takoyaki from Osaka, but you’ve only tasted the tip of the iceberg. After your tasty snack, hunt down some more places to try these other famous foods! 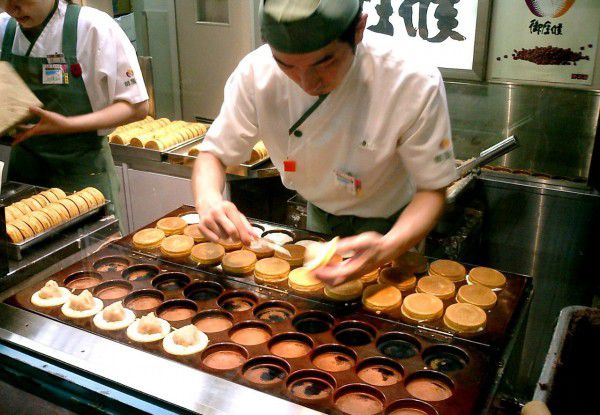 Taiko-Manju is a type of Japanese baked sweet. It’s made from a batter of flour, eggs, and sugar baked in a drum shaped steel or copper mold with steamed bean paste in the middle. Taiko means drum, and as you can imagine, the name comes from the drum-like shape. In other regions of Japan, they’re called “Ohban-yaki” or “Kaiten-yaki” or ”Imagawa-yaki”. 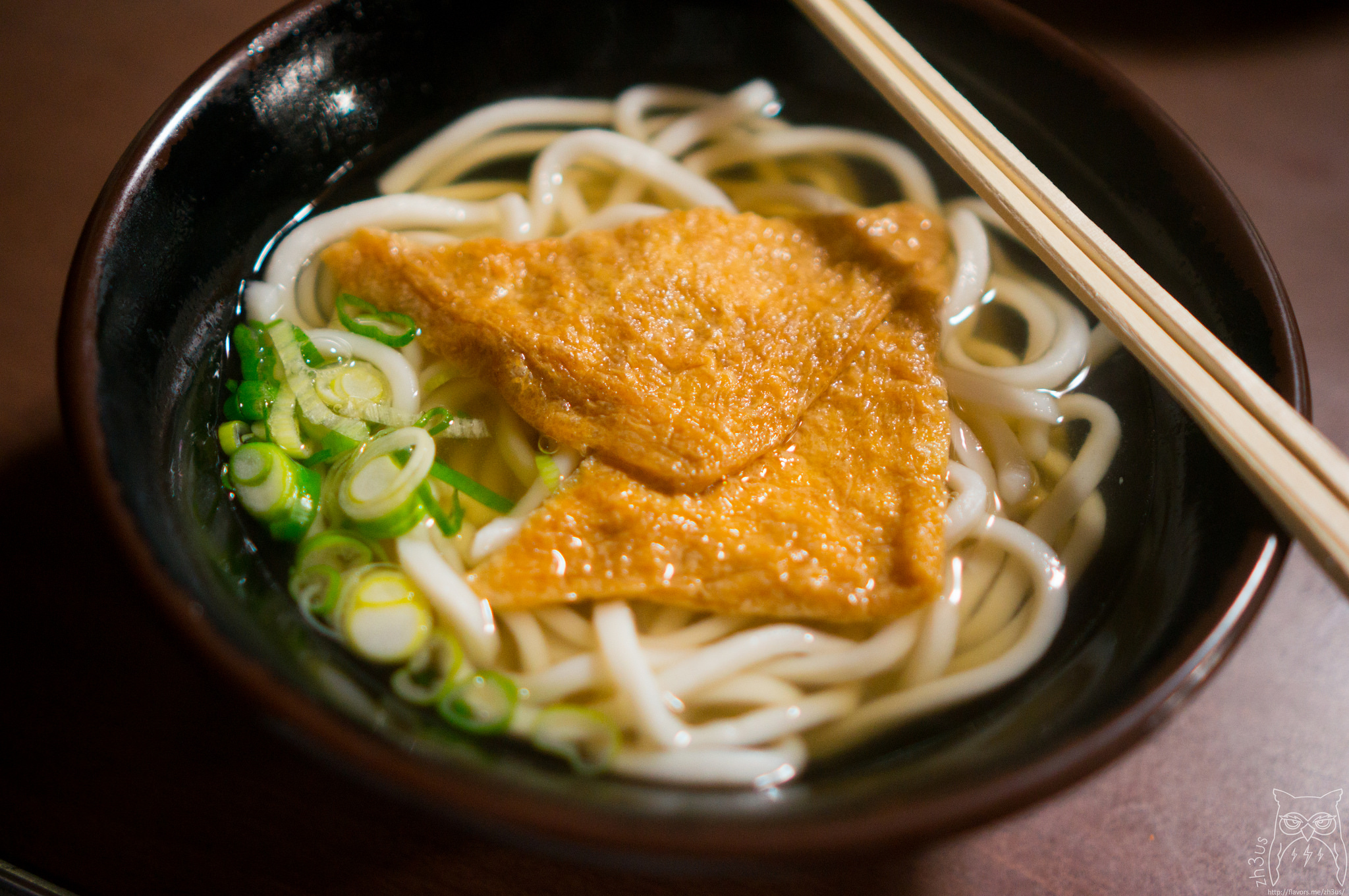 Kitsune Udon is a standard udon style with a piece of deep-fried tofu, simmered in a sweet sauce, on top of the udon. Now, you can eat it anywhere in Japan but it originated in Osaka. The main characteristic of the Osaka style udon soup is that it has a light flavor compared to the Tokyo style. It’s popular with kids too because of the sweet deep-fried tofu on top. By the way, “Kitsune” means fox. It’s said this udon’s name is Kitsune Udon because of the old Japanese saying “the fox loves deep-fried tofu”. 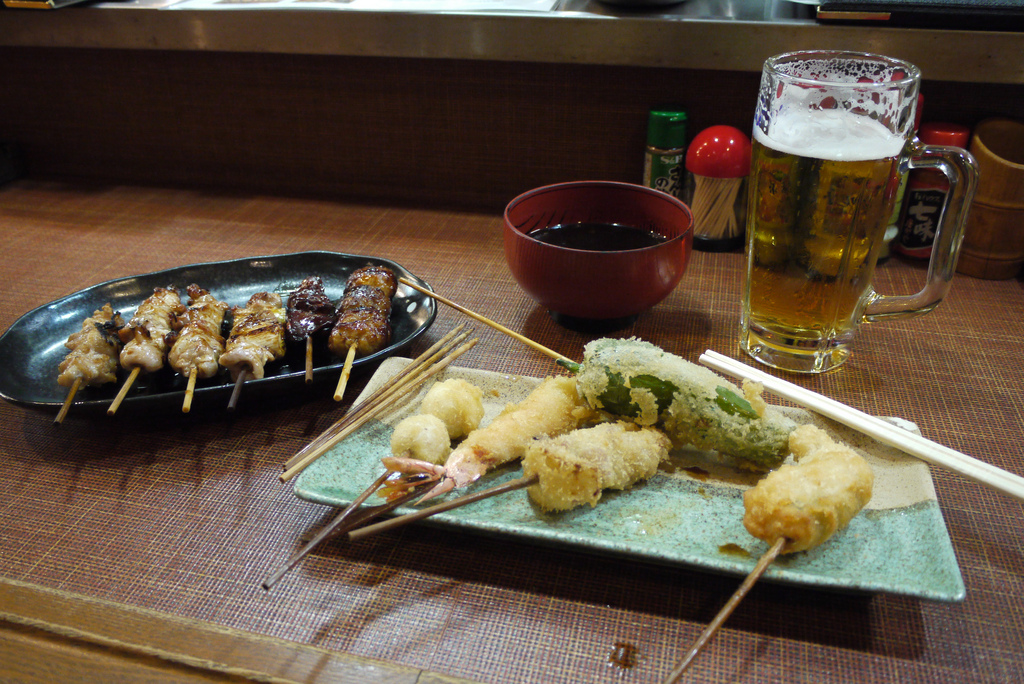 Kushikatsu is deep-fried meat or vegetables on a stick. The Tsutenkaku area in Osaka is famous for Kushikatsu restaurants. In the stores, there are sauce cans set at each table, and there’s a sign that says “Don’t dip twice!” This is because it’s the manner to limit yourself to one sauce dipping per stick when eating Kushikatsu. Even if you’re a tourist, you might want to keep that in mind. 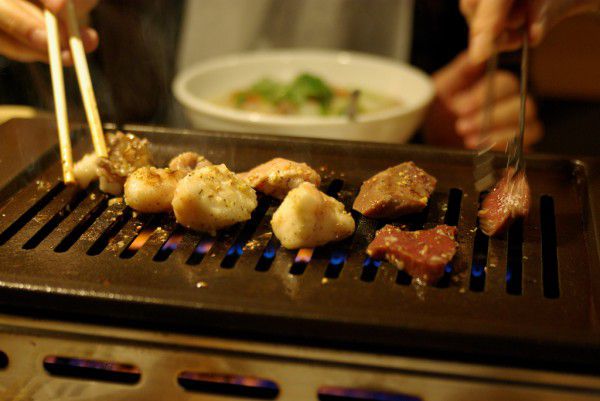 Horumon is the broiled innards of pigs or cows. It’s like Yakiniku, except that for Yakiniku we eat the high-grade meat. For Horumon we eat the innards that weren’t  eaten before. This is also a dish that originated from Osaka, and you can say it’s an idea that only the ever-practical Osaka people could come up with. It’s a typical menu in most Yakiniku and Izakaya (Japanese style) restaurants in Osaka.

Now you have all the info you need for a tasty trip to Osaka. Ja, itadakimasu!