Something Is Cooking In Hamilton!

I recently had the opportunity to spend the day in Hamilton, an industrial city with a few nicknames such as ‘the Hammer,’ ‘Steeltown’ and ‘the Ambitious City;’ the latter living up to its current status.

Hamilton is approximately 40 minutes outside of Toronto.  I must admit, I rarely if ever venture into Hamilton unless it was to attend the Juno awards (back in my music industry days with Warner Music), or a conference. Hamilton has never been on my mind as a place to go for the night, let alone a bite to eat. Well, after spending a full day in the downtown core, it did not take long for me to appreciate the booming and ambitious restaurant scene.

I will admit I can be a little Toronto-centric. I have all of my family and closest friends here. My favorite little haunts are within walking distance. I live in the neighborhood I have always aspired to live in. Why the heck would I want to make the trek outside of my comfort zone? Well for starters, it’s a good thing that I am adventurous and some of you reading this can relate to my occasional creature of comfort ways. I am hoping after reading this piece, you too will hop in the car or train, and see what all the fuss is about. I’m telling you, it’s worth it.

I arrived in Hamilton just after 11 am at the local Fortino’s –  grocery store of course! I was a part of a large group made up of food bloggers mostly and representatives from Trip Central (who sponsored the tour) and a very, very large fellow from the Hamilton Tiger Cats football club; offensive lineman Peter Dyakowski. We not only marveled at his size but his extraordinary appetite. A little trivia for you, Peter was crowned Canada’s Smartest Person by the CBC in 2012!

Here is a taste of what we discovered on our multicultural epic food tour! 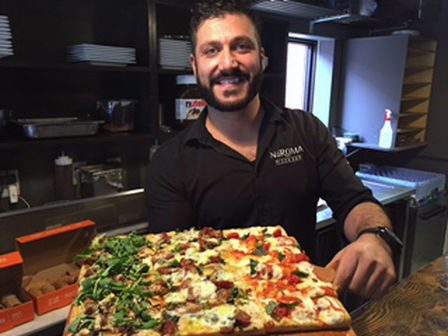 Owned and operated by Mario Spina, he spent six months in Abruzzo studying pizza making. His focaccia-based pizza is what sets them apart. Their pizza is a hybrid between Rome and Napoli traditions. The dough making is a labour intensive process that takes 72 hours, coined the ‘Naroma method!’ As Mario Spina would say “You can’t rush the dough!” During this visit, we sampled a variety of pizzas from their menu and their quinoa with cranberry, seasoned pecans, spinach, goat cheese, reduced balsamic and olive oil salad called Dolce. Beyond delicious!

Owner Nicole Spina can be found making up a fresh batch of apple fritters right before your eyes! The perfect accompaniment is their ‘straight from Brazil’ coffee beans. Carvello Farm in Brazil ships the coffee beans to Oakville where the owner of Carvello now lives. Fresh coffee and apple fritters all day long! Also on the menu: crepes, breakfast quiche, cold and hot sandwiches with quirky names such as the ‘portager,’ montecristo’ and ‘the broadway.’ Salads, crepes and vegetarian options are also available.

Owner Jorge Pereira presented the foodies with a taste of Portugal. “We’re eating fish tonight!” From ‘polvo,’ pressure cooked octopus sautéed with red sauce, to ‘favas,’ fava bean and chorizo, to ‘bacalhou a bras,’ shredded cod, tossed with shoestring fried and eggs, to ‘arroz de marisco,’ Portuguese rice with clams, mussels, black tiger shrimp, lobster, calamari and scallops married together in a light pimento and tomato sauce. I was pretty much ready to tap out at this point. Thank god for stretchy jeans and Peter!

This cozy little restaurant offers an ever-changing menu. We sampled a bite-sized portion of their Ken’s Sheppard’s pie in their small bar called Black Sheep Shack. Their daily menu includes soup of the day, salads, sandwiches and dinner includes duck confit to slow-roast porchetta. They also have vegetarian options.

Established in 1837, the market is managed by the City of Hamilton and is opened year round. There are 60 vendors that include local artisans selling their wares, food and flowers. During our visit, we had an opportunity to sample the fare from Pokeh and Eat Ramen. 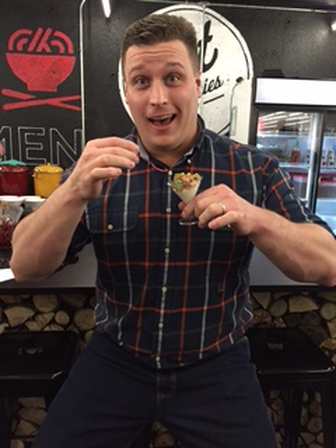 Aloha! Owned and operated by husband and wife team Salar Madadi and Jeannie Crawford since November 2015, Pokeh offers an array of healthy and fresh poké bowls. They have over 20 different toppings to create your perfect combination. We sampled Spicy Tuna poke (yellow fin tuna, line caught, ocean wise recommended and fair trade certified) and green bowl (vegan/gluten-free), tamari, ginger pickled shiitake mushrooms, tofu cubes, edamame is some of the ingredients. I have been to Hawaii a couple of times and can wholeheartedly say they have brought a taste of Hawaii to Hamilton. Mahalo nui loa Salar and Jeannie!

I am going to flat out declare, this is the best ramen I have ever tasted. I have not yet been to Japan, so until then, this is the best! The Eat Ramen stall in the Hamilton Farmers Market opened just over 3 months ago. We enjoyed acau ramen chicken with Sun Noodles imported from Japan. Pickled bamboo shoots, scallions, red miso and no preservatives complete this bowl of goodness. Seconds please!

The mule is a delightful and colourful taco bar. From traditional tacos to a carefully crafted bourbon and tequila cocktail menu, this taco joint is a cool place to hang with friends and family. The vibrant colours and flavours remind me of the food tour I took in Puerto Vallarta. We all sampled their tasty tacos and fed the rest to Peter. I have never seen anyone eat so much!

This restaurant is a staple in the Hamilton food scene. Owner Mark Farrugia opened La Piazza over 19 years ago. We sampled a taste of Italy with Ravioli Vesuvius (egg yolk, potato and ricotta mixture encased in fresh pasta topped with a cream sauce and crispy pancetta). And like Vesuvius (the only active volcano in mainland Europe), the egg yolk within the ravioli slowly erupts with the touch of your fork.  La Piazza makes their own delicious bread and sauces on site.

By the time we arrived at Mezcal, it was approximately 8 pm. And although, they have two large windows allowing the streetlights to seep in, the setting inside is dark, lit by candles and the gently backlit bar with 80s music setting the scene. This hip Mexican style eatery uses only the freshest, local ingredients with everything from the pickles to salsa made daily in the restaurant – cooking with a conscience is what they do. The tequila? Forget about it – if it’s not 100% agave, they won’t serve it!

Our last stop. By this point, most of us are comatose but we press on. The posh Aberdeen Tavern thoughtfully ended our night appeasing our sweet tooth. An array of desserts: custard choux pastry and mini lemon meringues was the perfect end to a full day (10 hours) of sampling Hamilton’s finest fare.

Thank you to all of the restaurants that graciously hosted our group, Hamilton’s Economic Development Office, Trip Central and to Hamilton Limo for safely guiding us through the city. Finally, to Peter Dyakowski for entertaining and eating what remained.

Make the trek to Hamilton. You won’t be disappointed!