A Guide to Jordanian Cuisine

Imagine yourself in Jordan walking through a bustling market filled with food, spices and people. The scent of Za’atar with it’s medley of thyme, oregano, sumac and sesame seeds surrounds you. As you walk further into the heart of the market, you catch a hint of cumin and the mouth-tingling cardamom, with its strong punch of flavor. The flavorful Jordanian cuisine is handcrafted with the freshest herbs, spices, and olive oil (Jordan is one of the largest producers of olives in the region), which are procured from these very markets.

Sure, In Jordan you can get all the usual ethnic classics – Chinese, Italian, and even McDonalds, but street food and home-cooked meals are the heart of Jordan’s Levantine cuisine. The Levantine cuisine has been influenced by neighboring countries like Armenia, Iraq, Syria and Lebanon. Thousands of years of history and culture blend together seamlessly to create the modern dining experience you will find in Jordan today.

It’s said in Jordan “If you don’t leave Jordan heavier, we haven’t done our job.” and it’s true. The Jordanian people proudly serve their rich, robust food with warm hospitality.

MEZZE is an experience in itself. It’s usually an appetizer, consisting of small shared tasting plates of dips, salads, roasted vegetables, falafel, hummus and olives with bread (pita) used for dipping and scooping. It’s a community style of eating and there is plenty to go around, so much so that it’s difficult to face the main course when it appears.

FALAFEL is a deep-fried ball (doughnut or patty) made from ground chickpeas married with delicious spices. Sometimes served in pita pockets and topped with pickled vegetables, hot sauce and a drizzle of Tahini sauce. It’s commonly eaten as a meat replacement and often part of the MEZZE. 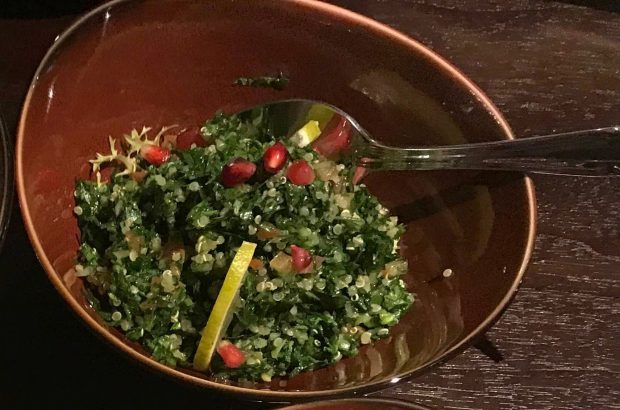 TABOULEH has become one of the most popular salads in the Middle East. It’s traditionally made of tomatoes, lots of fresh finely chopped herbs (parsley & mint) bulgur, onion and a dressing of olive oil, lemon juice and salt; sometimes garlic or lettuce and couscous instead of bulgur.

(spice made from ground sumac berries, quite tart).

LEBNEH is a strained yogurt cheese shaped in small balls and preserved in oil. It’s often eaten for breakfast; served with *za’atar and olive oil and spread on warm flatbread. This is a serious addiction. 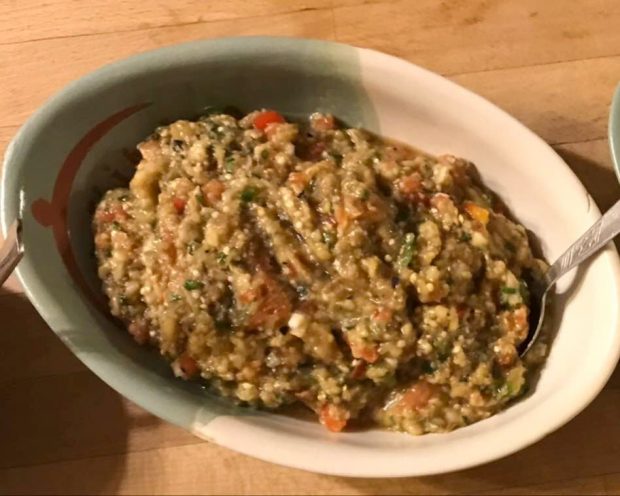 BABBA GHANOUSH starts with roasted eggplant, just like Moutabel, but in this case chopped parsley, onion, tomato, chive and sometimes green and red pepper are folded into the eggplant. More of a salad than a dip. In some areas the peppers and chives are replaced with pomegranate molasses and walnuts.

MAKDOUS usually made in the fall and stored for use over the winter. Baby eggplants get Stuffed with walnut and sun-dried red pepper, garlic, oil and salt, then preserved in olive oil.

ZETUN means ‘olive’ and is served as a salad – olives, carrots, green pepper, chili and olive oil, it’s a good dish to clear the palate for your next course.

PICKLED VEGETABLES are usually part of the mezze. Jordanians love to pickle just about everything and this dish starts with a medley of baby vegetables (carrots, radishes, cucumbers, cauliflower etc.) which they pickle.

DOLMA is a stuffed vegetable (tomato, pepper, onion, zucchini, eggplant) or leaf. The most common dolma is made from grape leaf stuffed with meat. Meat dolmas are usually served warm or hot, often with sauce; vegetarian dolmas are typically served cold.

MANAKESH (MANAQISH) is a flatbread topped with thyme, olive oil and za’atar, cheese or ground meat (like a pizza) and can be sliced or folded. It’s usually served at breakfast or lunch.

CHICKEN SCHWARMA (sometimes made with lamb or beef) Schwarma is also popular in Europe and now North America; its thin layers of meat stacked on a sword like spit that revolves over a heat source. When cooked it’s shaved off and wrapped in bread with a garlic sauce or tahini and pickled vegetables.

GALAYET BANDORA is a simple – and simply yummy – vegetarian dish consisting of tomatoes, Serrano peppers, garlic, onion and olive oil. The finished dish is thick and rich, topped with pine nuts and eaten with pita.

MANSAF often referred to as Jordan’s “national dish”, this magnificent Bedouin dish is served on joyous occasions like big festivals or family reunions. It consists of simmered lamb (or beef) and onions mixed with yoghurt served on top of rice which has been piled on top of buttered flatbread. The whole dish is topped with butter, almonds and pine nuts. It comes to the communal table on a large tray.

ZARB is a Bedouin barbecue consisting of lamb and vegetables; a traditional Bedouin way of cooking. A 3-tiered container (meat on the bottom shelf, veg on the others) is topped with a lid, placed in a pit, covered with hot coals then buried in the sand.

After many hours the 3-tiered racks are dug up and the meal is served at sunset.

MAKLOUBEH (MAGLOUBA or MAQLUBA) Maqluba means ‘upside-down’ which is how this dish is served. It’s a chicken dish (sometimes called upside-down chicken) cooked with rice and fried vegetables; when it’s ready to serve it’s flipped upside-down.

KUBZ (PITA) is referred to as “ordinary” bread. This pocket bread is served an almost every meal

SHRAK is a Bedouin flatbread, baked on a large domed metal griddle (like an inverted wok).It can be tossed until very thin then thrown on the griddle.

KNAFEH is a rich, creamy dessert made with a cheese pastry soaked in sweet sugar-based syrup.

HALAWA (HALVA) often served as a side at breakfast this sweet treat is made of honey or sugar-sweetened tahini sesame paste; sometimes flavored with pistachios, almonds or chocolate. 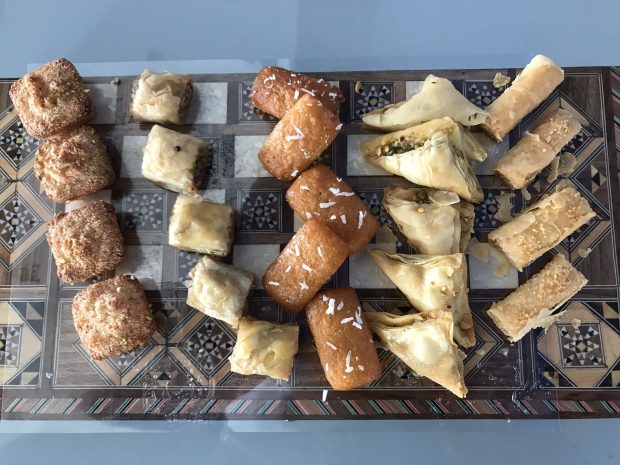 BAKLAVA, a baklava is made of filo pastry with layers filled with nuts, such as pistachios, and sugar or honey syrup.

TEA is the Jordanian drink of choice and has a very social aspect. Instead of asking “how are you” Jordanians ask “would you like some tea?” The teas vary from black to herbal served with combinations of herbs (sage, thyme, mint rosemary or verbena), mint tea seems to be the favorite. 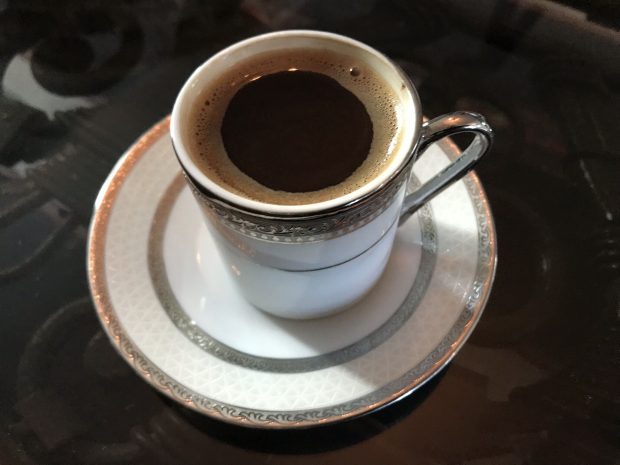 Arabic coffee is made with ground fire-roasted beans and cardamom – not just a drink – in Jordan it’s a traditional sign of respect, a way to bring people together.

Turkish-style coffee is stronger than Arabic, actually ‘high octane’. The coffee grounds and sugar are added to a tiny pot of boiling water as it continues to boil – It’s served thick and sweet and available at street vendors all over Jordan.

LIME-MINT JUICE is a common drink in Jordan, made from lime juice and ground mint. A sugar syrup is served on the side so you can control the sweetness.

Parm Parmar
Parm Parmar is a recognized and well/published lifestyle writer,specializes in Travel and Cuisine. Her articles can be found across the web, in print, and on her blog, Planet Blue Adventure Energetic,articulate and fun, Parm combines her extensive IT, social media, film, and business experience with dynamic ideas for content creation and stories.