Plane Food: Why Is It So Bad And Can We Do Anything?

Bland flavours, stale bread, cookies the consistency of copper, and everything is a LOT too chewy. Plane food is just plain terrible. The first semi-official meal of your journey will almost never live up to the new and exciting foods you’re already dreaming of. This is something of a rite of passage, a necessary step on the flight of stairs that is your new travel adventure. But that doesn’t mean it’s fair, or pleasant. It only gets worse if you wander out of business class and into real world, or what I like to call economy seating. What passes as food here is a crime against humanity!

This is being called the world’s best passenger complaint letter against plane food, and for good reason. This gentleman caller engaged the dissatisfied foodie spirit inside of us all. Several choice samples are: “the tomato next to the two yellow shafts of sponge on the left… a sour gel with a clear oil on top… a piece of broccoli and some peppers in a brown glue-like oil… [and] pass[ing] the potatoes through the digestive tract of a bird.”

But this complainer is not the only one. Vegetarian and vegan plane food options are pitiful, with some questioning whether or not airlines actually know the difference between the two. Most passengers who answered a survey about their meal rated the vegetarian and vegan options as yucky or super yucky. Intolerances and dietary restrictions always provide a seemingly impregnable labyrinth for airlines, never mind any airborne allergies that might strike disaster.

This is a recipe for disaster. Pun very much intended. It might even strike a bit of a gassy tube, and cause the dreaded plane fart to wreck havoc on everyone involved. 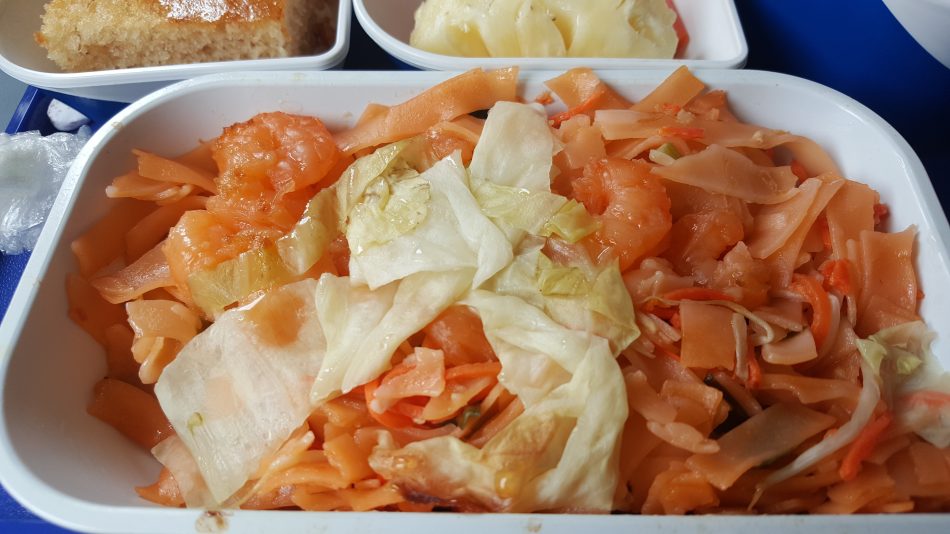 There might be a scientific explanation. In fact, there might be several. The low humidity in-flight dries our nasal passages. The oxygen saturation in our blood decreases. The low air pressure desensitizes our taste buds. All of this combines together, causing plane food to taste like it would when we have a cold. That is, salt and sugar are perceived 20-30 and 15-20 times less, respectively, than on sea level.

But Jay Wacker, a professor of physics at Stanford University, has a different perspective. He responded to the question “Why is airplane food so terrible?” on the website Quora, with a reminder about the specific needs of each individual passenger, saying, “Safety first and if compromises in taste are necessary, so be it.” 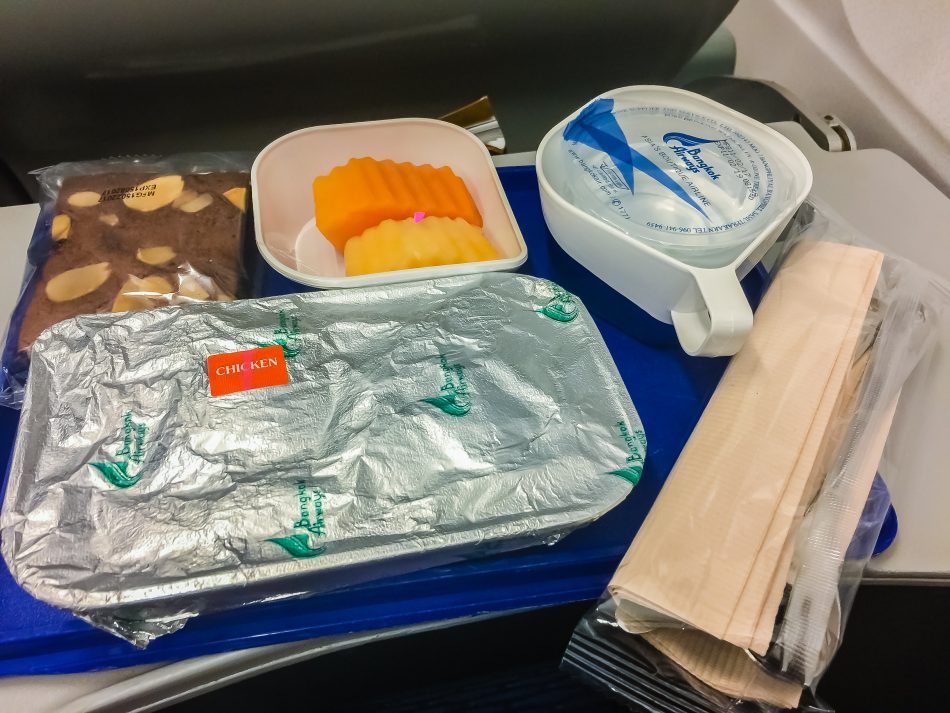 They Brought In The Big Guns

But there might be hope after all! There are lots of people trying to fix it, including some industry experts. Goussault is a science and food master who developed the sous-vide method and founded Cuisine Solutions. Michel Roth is a French chef with 2 Michelin stars under his belt, who determined to make plane food just a little bit less depressing. In 2011, British Airways sought help from Heston Blumenthal, a British celebrity chef. Blumenthal advocates for a scientific understanding of food, and tried to fix the problem by stimulating the trigeminal nerve. This nerve is responsible for sensation in the face, and can help people think the food they’re eating tastes better. Singapore Airline even recruited Gordon Ramsay to consult for their in-flight menus, although Ramsay says he will never eat airline food. Nik Loukas, plane food expert and reviewer (more on him later), reminded me that both Singapore and Lufthansa Airlines “use special labs to create a pressurised cabin on the ground, to allow them to taste test meals as they would be when served at 35,000ft.” No can say they haven’t tried to entice the taste buds. 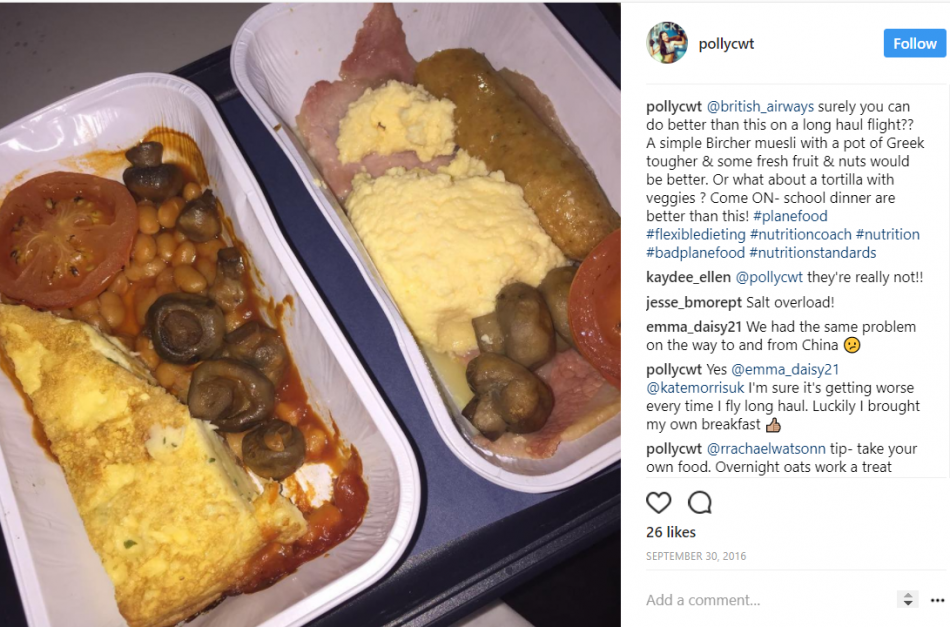 Apparently, Michel Roth is too fancy for the little people. No, he came to help give the business class cabins a tastier experience. It was heads and tails above the glorified cardboard Ann Hui was used to, as she notes in this article. But nonetheless, it was still definitely airplane food. I don’t know about you, but I’ll take the advantage where I can. So why does it seem so difficult for us lowly economy travellers to get the same, relatively edible selection as those in business? Isn’t yummy food a human right?!

In fact, let’s let Jay Wacker explains the ultimate conspiracy. He says that, “less than 3 per cent of a major airline’s customers – the high-yield ones who pay for business- and first-class tickets – can account for 25 per cent of the company’s total revenue” This means, in essence, us thrifty shoulder-stuffers in economy don’t make them as much money, even given that economy sitters make up 75-85 % on average of the entire plane! Wacker also says, “If an airline was totally dedicated to delivering high quality meals, they could re-engineer the entire process. But that is not going to pay for them.” 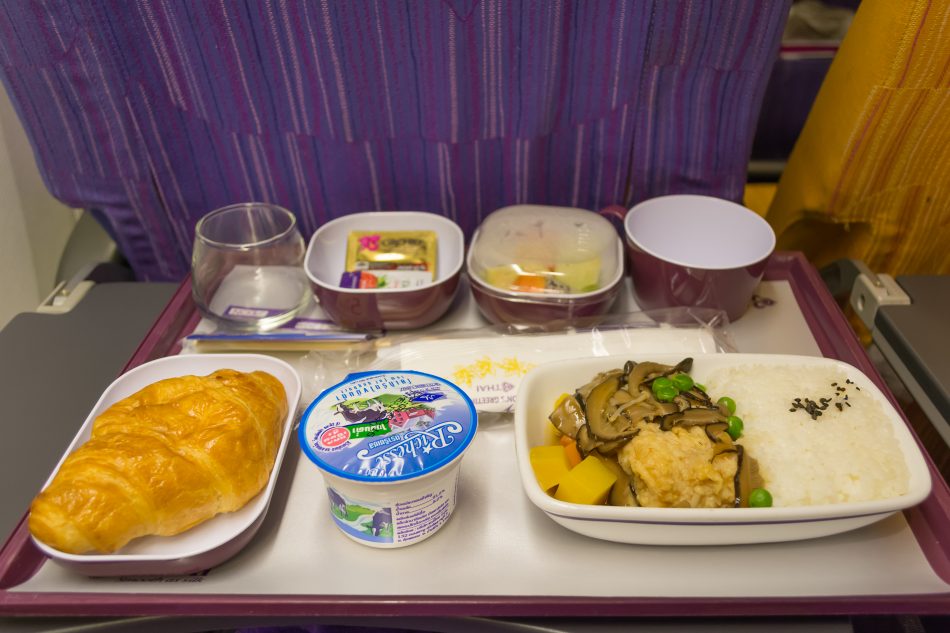 Nik Loukas spends his days sampling and reviewing plane food, from economy to upgrades to business class. He has a popular Instagram account where he cultivated his following, and is in the process of making a “passion project” documentary about plane food, including a bit of behind-the-scenes work. He tells me his goal is to say, “Hey it’s not that bad!” and defend a bit of the “mammoth task” that is preparing in-flight meals for 200 or even 300 people.

Loukas says he is a big fan of upgrading your meal in economy class for a price, although he freely admits that, “the biggest factor when it comes to eating on-board and what you will get is…. budget.”

Loukas has received a number of sponsors over the years, which he always discloses, but tries to fund most of his travel himself, as special treatment isn’t a true representation. His reviews always try to be as positive as possible, but he has also written his fair share of bad reviews. He notes, “I’ve also had airline[s] contact me to offer me another trip… to redeem themselves, as their review was quite poor.”

While Mr. Loukas’ positivity and good vibes are refreshing, and the creation process will surely be fascinating, I’m still not sure I’m convinced. 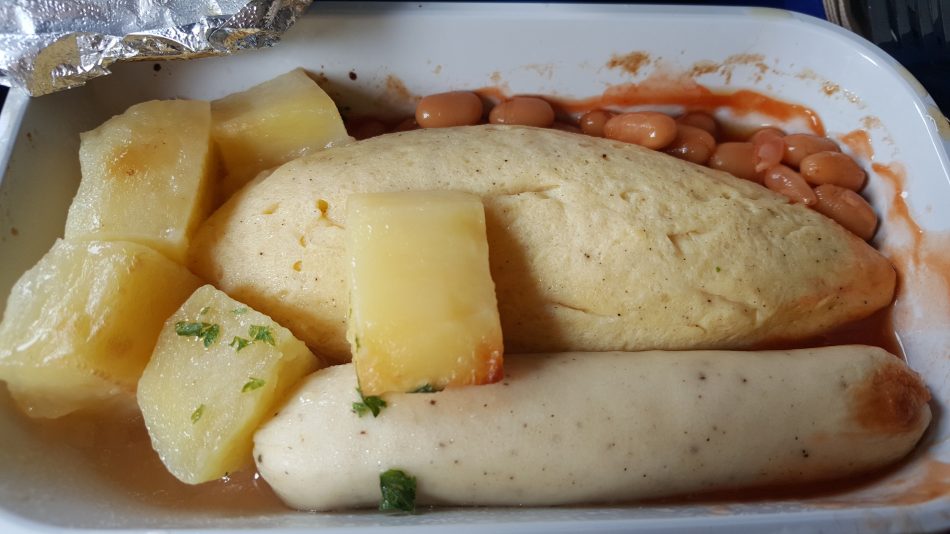 You Can Fight The Injustice!

I mean, let’s be as honest as we can. Tasty plane meals feels like a distant-future kind of thing, much like teleportation and flying cars. But there are a few ways you can find some small joy in the tin-foiled disaster that is plane food. The experts suggest using noise cancelling headphones while eating, as this can help fine-tune your other senses. There are also very particular high-altitude wines, such as this Argentinian Malbec, that taste better at cruising altitudes. Blumenthal, ever the classy fella, suggests a nasal spray or douche. I don’t know how desperate you are to taste the plane food, but it might be worth a try.