Bordeaux Wine in France is the Vehicle to this Amazing Region

If you haven’t traveled to South Western France, add Bordeaux to the top of your list of great European cities to visit. As a port city located on the Garonne River, Bordeaux is among the most vibrant, energetic, and dynamic cities in France. Read on to learn why an amazing bottle of wine is just the beginning in Bordeaux, France.

The city carries the title “La Belle Endormie” (Sleeping Beauty), referring to the old center that had walls blackened from pollution and left a grime which turned the finest buildings into a dull shadow of the original. After Paris, Bordeaux is home to the largest number of historical buildings in France. 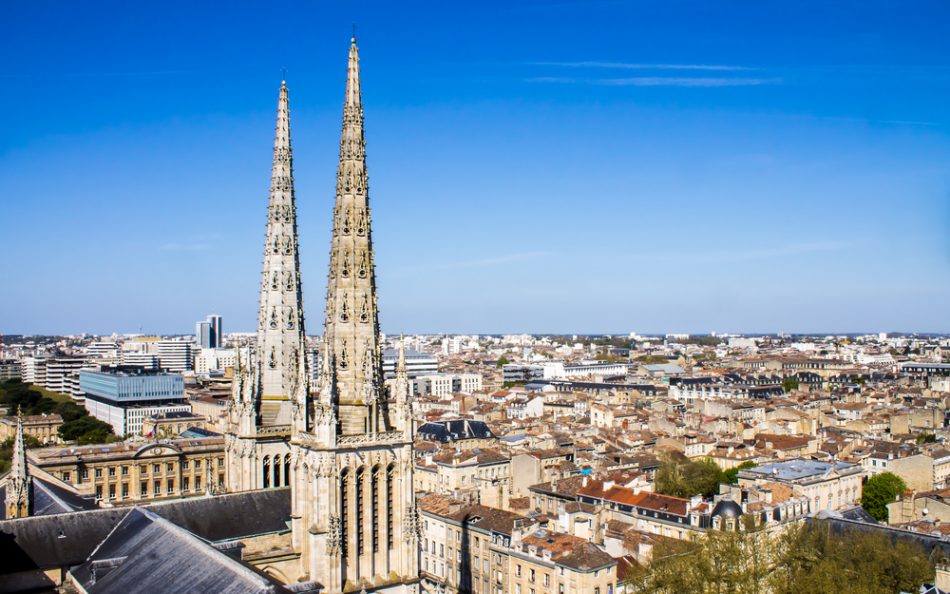 Late spring and summer are the best times to visit, as the average temperature is a comfortable 70°F. Although the fall is beautiful, it’s also harvesting season for the wineries, which might mean some vineyards may be closed to the public.

Head towards the river for a stroll and feel like you’ve landed in a fairytale. The boardwalk arcs around the river and is peppered with fresh, colorful tulips. It is the ideal location for a spectacular view of the city’s breathtaking architecture. The Pont de Pierre bridge, commissioned by Napoleon, is a great spot for the perfect photo! 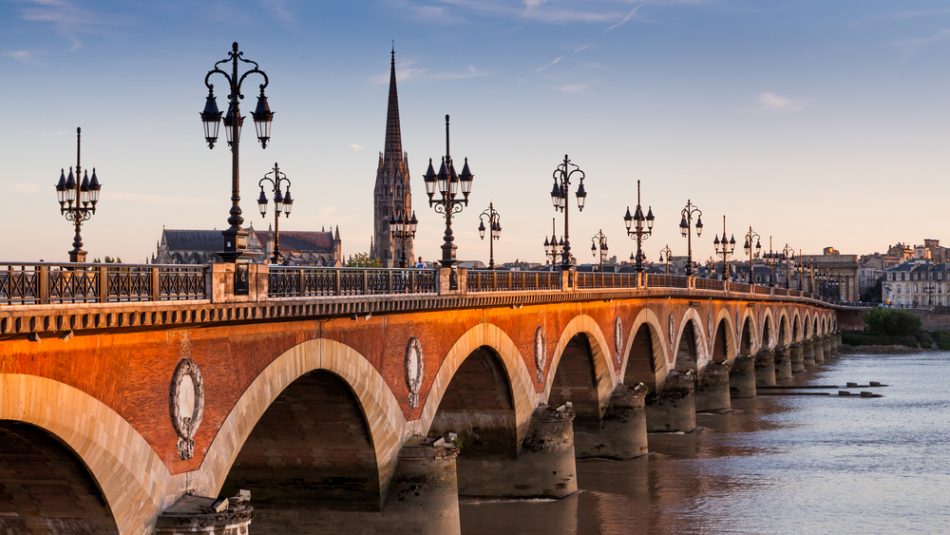 The Place de la Bourse and its surrounding buildings are one of the most recognizable sights of the city. The place, a stunning and epic structure, is a perfect showcase of the city’s impressive buildings and was originally dedicated to the French ruler Louis XV. It was designed by French architect Ange-Jacques Gabriel who was also responsible for parts of Chateau Versailles.

This grand palace is a good example of neoclassical French architecture and is decorated with symbolic “facades mascarons” (facial sculptures) of Roman gods. Get up close and observe Neptune and Mercury representing commerce, Minerva representing the arts, and some African women’s faces in reference to the slave trade which brought wealth to the city.

“Miroir des Quais” is located directly across from Place de la Bourse and displays a thin layer of water spread across a granite plaza. This world’s largest water mirror showcases a spectacular symmetrical reflection of The Place! 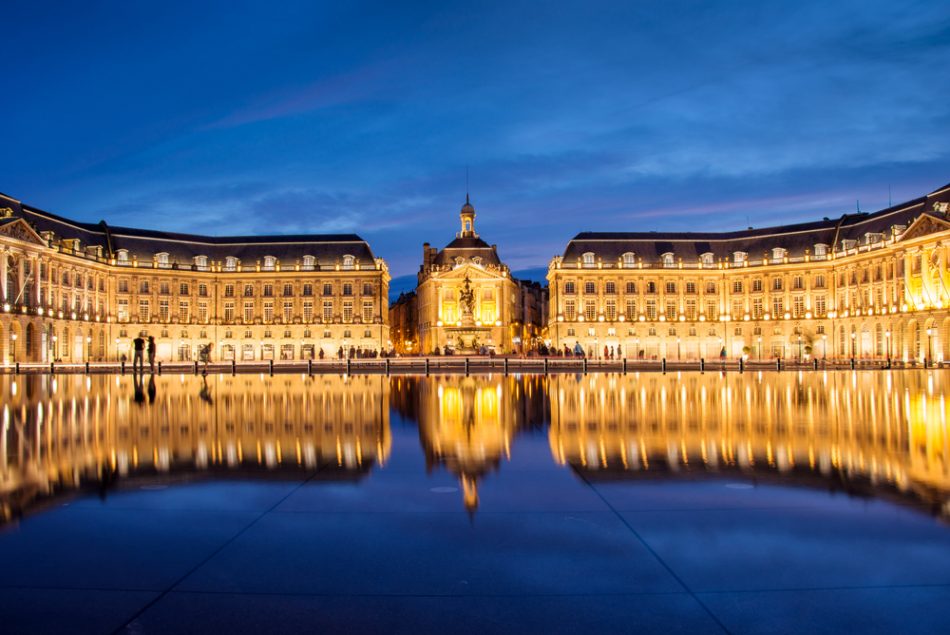 Although stunning during the daylight, this beautiful line of archways and slate roofs is even more brilliant at night as the mirror displays a stunning luminous reflection.

Other historical buildings you don’t want to miss:

Bordeaux Cathedral is one of the greatest examples of medieval architecture in France. This Roman Catholic cathedral was consecrated by Pope Urban 11 in 1096. Only one wall remains from the original structure.

The Grand Théâtre de Bordeaux was built in the late 1700’s and is one of the most beautiful neo-classical concert halls worldwide. The main facade in the front has 12 statues standing atop columns which represent a mix of art muses and Roman Goddesses. (Today it’s home to Opera National de Bordeaux.)

If there was only one wine region you could visit in the world, Bordeaux should be it! The city of Bordeaux is surrounded by regions and appellations known to wine enthusiasts as the Left and Right Bank. 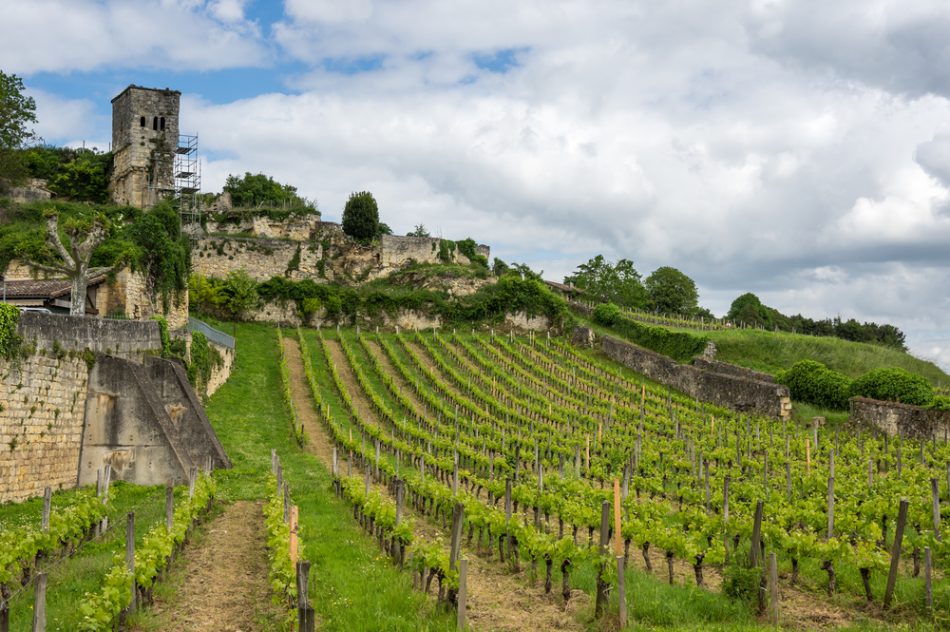 The Left Bank, located due north of the city, is home to some of the most prestigious Chateaux in France (including the famous Chateau Margaux). Cabernet Sauvignon is the predominant grape found in the wines here. When enjoyed early, the wines are full bodied and express fruity notes of blackberry, cassis, and baking spices. 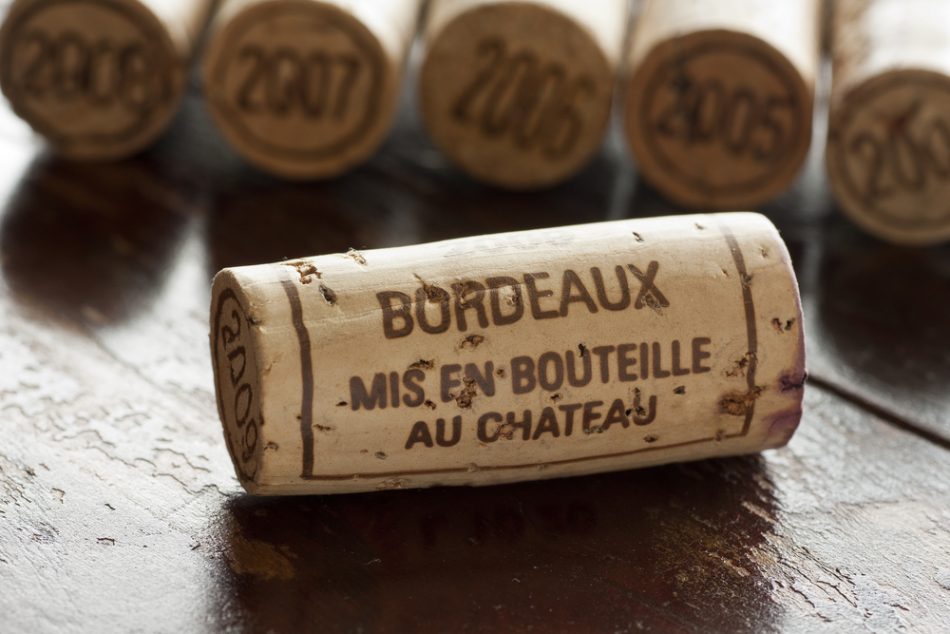 The Right Bank, a region to the right of the city, grows predominately Merlot grapevines and is popular for its merlot blends. This grape offers a slightly different flavor than Cabernet, with notes of raspberry, plum, and vanilla.

Saint Emilion, located on the right bank, is a town and wine appellation within a 40-minute train ride from Bordeaux city center. It is classified on UNESCO’s World Heritage List and is one of the best areas to visit in France.

The train stop lands you smack in the middle of wine country, roughly 1 mile away from the charming medieval village of Saint Emilion. Even for non-wine lovers, the view of this compact little town rising from the surrounding vineyards is a site to see. 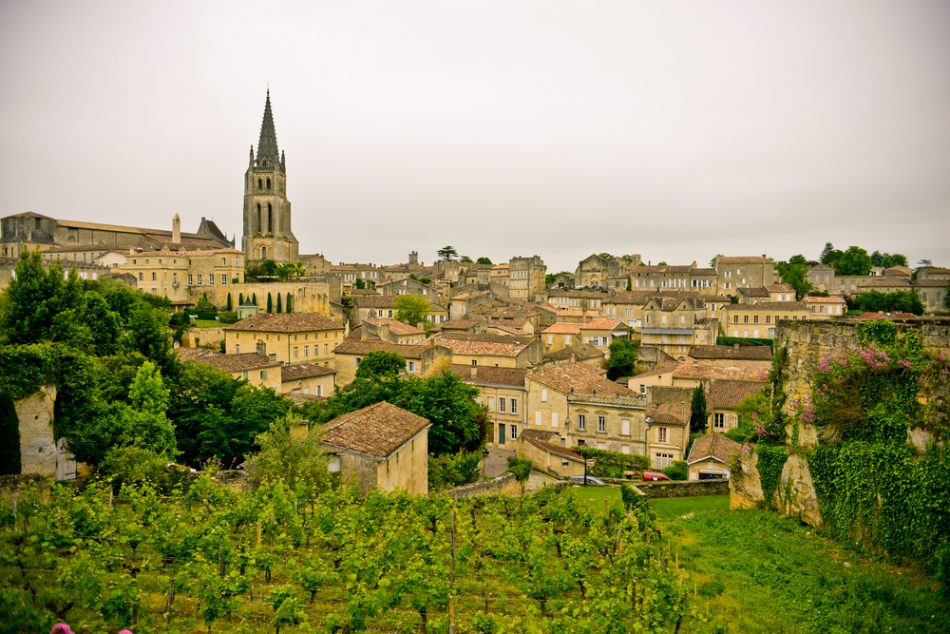 Saint Emilion has over 1000 years of history in wine appreciation. After the collapse of the Roman Empire in the 5th century, the Christians were responsible for the survival and spread of viticulture, as wine became an element of worship.

Today, the town offers world famous wineries nestled in peaceful valleys, and stunning architecture such as Chateau Cadet-Bon, which provide an old-world French feel that will leave you swooning.

Sign up for a private or small group tour of Saint-Emilion Chateaux with Bordovino, or visit a winery or two on your own. When you’re done soaking in the scenery at the vineyards above ground, head a little deeper into the vast underground caves which span hundreds of miles and sip on some of the best wines from the old world. 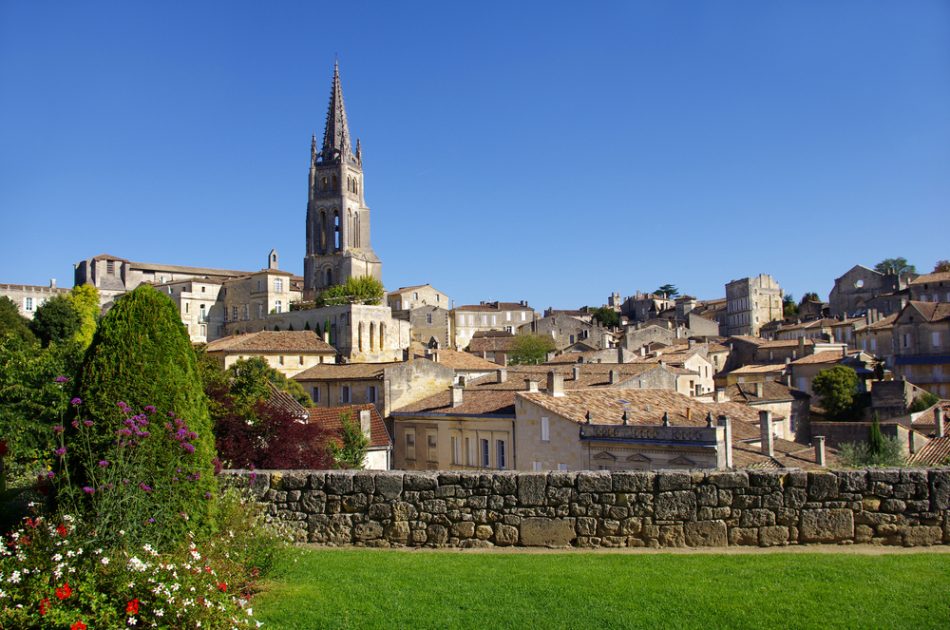 Climb to the top of Chateau du Roi and enjoy the stunning view of the vineyards and French style rooftops!

Visit underground Saint Emilion and discover the widest underground church in Europe. Here you can learn the secrets of the catacombs and witness major historical monuments.

Though there are countless delicious restaurants in Bordeaux, the best meals are the most simple. There is no such thing as a bad croissant or pastry in these parts. Luckily, the streets are lined with delicious bakeries and quaint little coffee shops, making it easy to grab a quick breakfast at the first cafe that catches your eye. 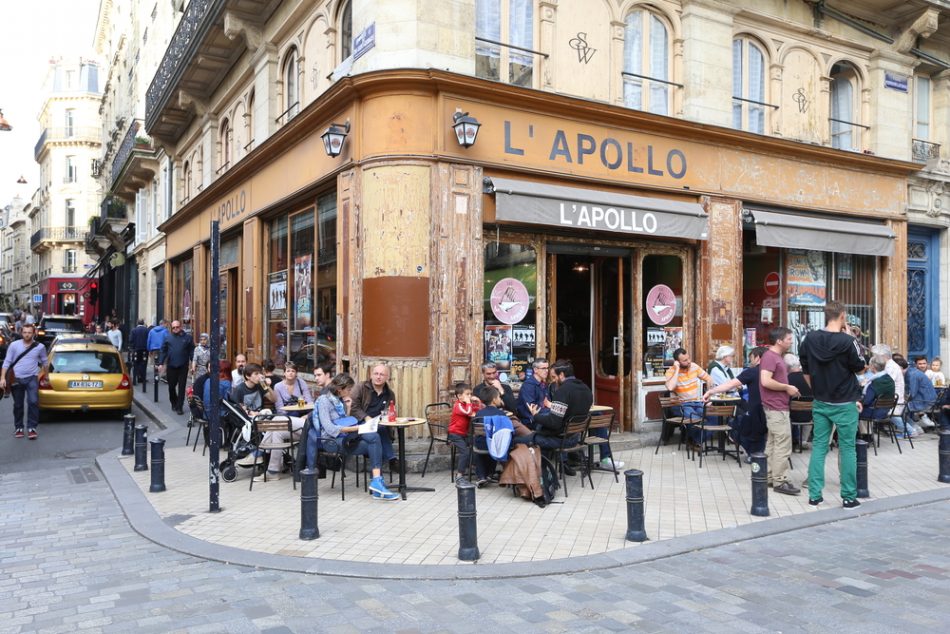 For lunch, gather a few simple French favorites together like a baguette, cheese, and olives from local artisans and have your very own picnic at Parc Bordelaise. Don’t forget a bottle of Bordeaux wine, a corkscrew, and a few glasses, and get the party started! 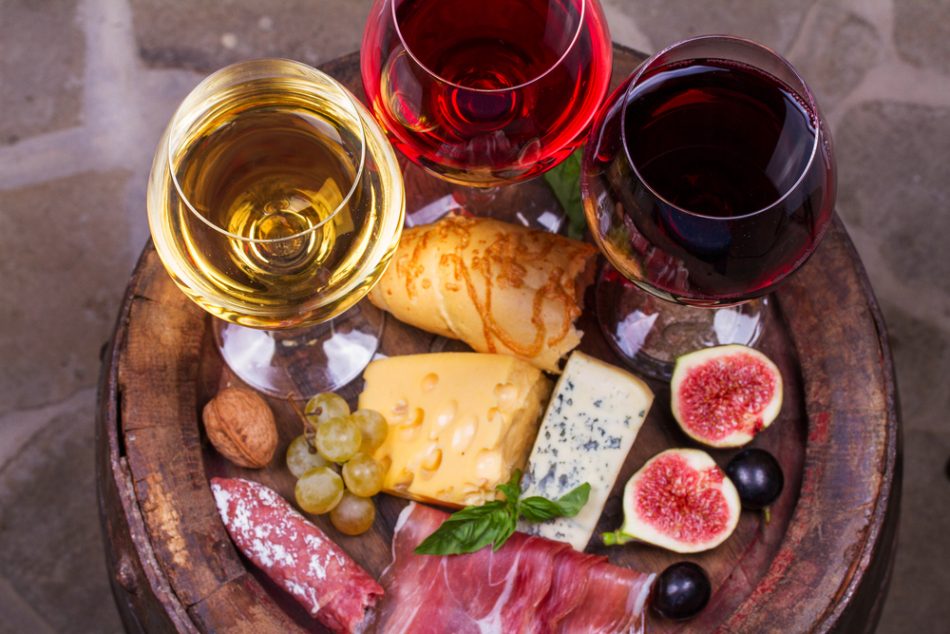 For a fine-dining experience, visit Garopapilles in the heart of the city. A Michelin selected restaurant in Bordeaux, Garopapilles offers one of the best five-course French meals around. With popular dishes including squid ink gnocchi and veal medallions with praline, the seats fill up fast on a daily basis, so you’ll need to make a reservation in advance. This venue is unique, in that it has combined an extensive wine cellar and boutique located at the front entrance.

The main courtyard in the heart of Saint Emilion is the best area to relax and enjoy a meal and a glass of full-bodied cabernet from the surrounding region. Conveniently all of the restaurants here have outdoor patios, which surround a landmark tree that has grown out of the center of the courtyard. 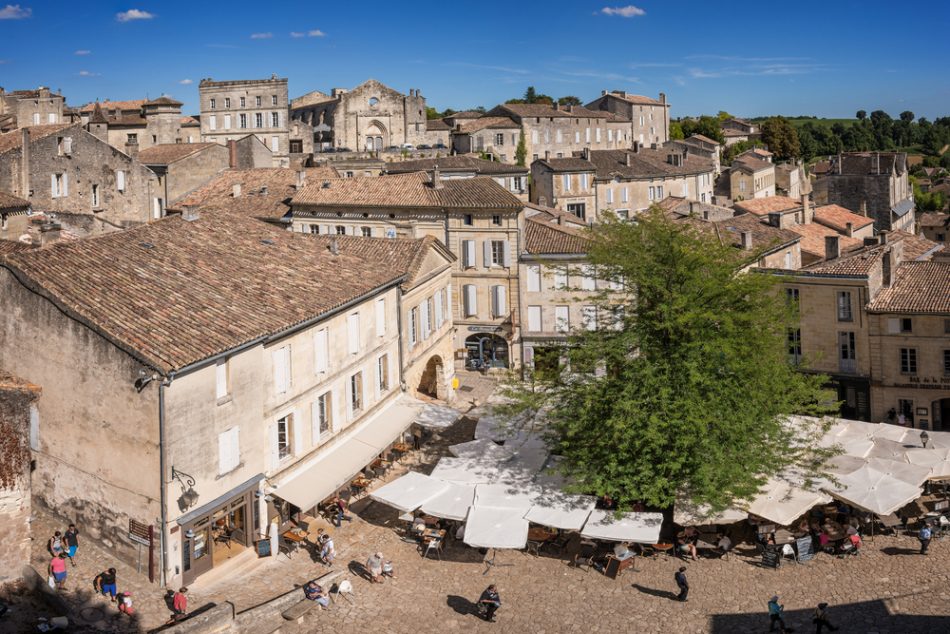 Don’t miss out on these other great eateries:

Le Bistro du Musee, located on the terrace directly across from the Bordeaux Cathedral offers a great view of the cathedral and surrounding city hall structures. French delicacies on the menu include sweet bread soaked in sweet wine, whole duck with confit wings and liver, and slow roasted lamb shank.
Chez Ponpom is one of the oldest brasseries in town, a local hot spot for over 100 years. Head over on a Thursday night for ‘Sweet Hour’ (happy hour) and enjoy the chefs choice of charcuterie and dancing to French style music.

Bordeaux offers something for everyone. Whether it’s the wine, the food, or its history and architecture, you will fall in love with this French city in a minute.