The 21st century summarized in 3 words is: selfies, millennials and the internet. In a generation where people stand on chairs to get the perfect flat lay of their food, it is refreshing to visit a place deeply embedded with century old culture and values. The island of Java proves that dynasties, monarchs, castles, legends, and kings are not just fairy tale blisses, but true relics of the past.

The Special Region of Yogyakarta, Indonesia, is the only region in Indonesia still governed by a monarchy. Hamengkubuwo is the dynasty of the Yogyakarta Sultanate that currently leads the region. As of today, there have been nine past rulers. It is currently led by Hamengkubuwono X, the 10th ruler.

If you have sunbathed in Bali and chilled in Jakarta, the city of Yogyakarta should be next on your list. 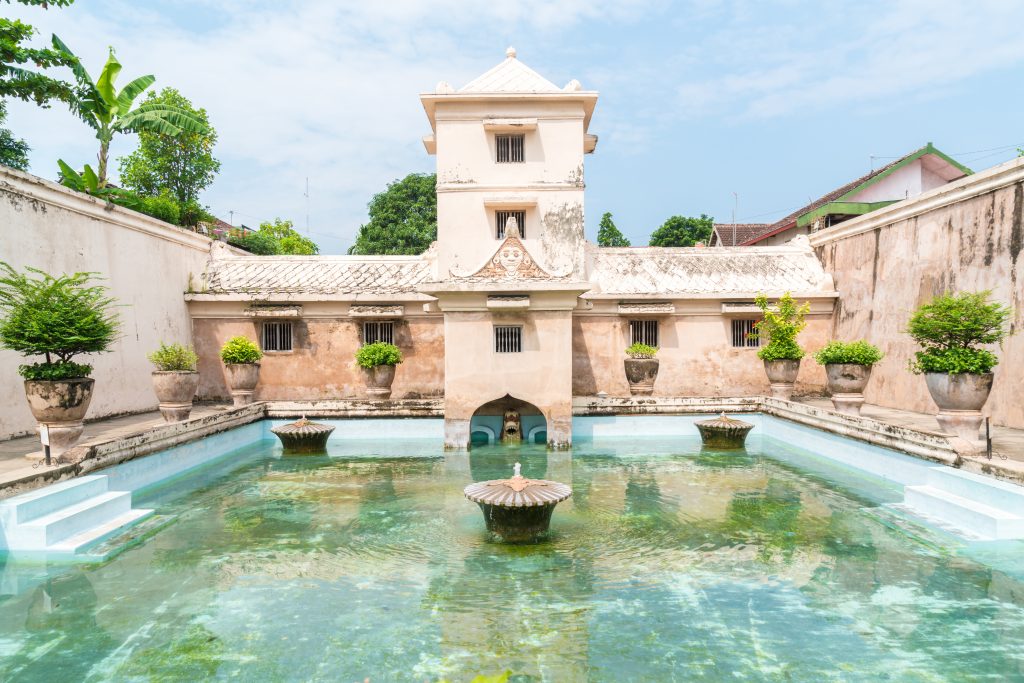 The complex of Taman Sari was once used by the Sultan’s as a resting place in the 18th century. The site consists of four buildings but only a few remain well-preserved. One of the areas on the site is the bathing commons once used by princesses. Another site is where four staircases meet at Gumuling Well. Because most of the area is occupied by people of the Kampung Taman settlement, you will pass by houses and locals when wandering around the premises. 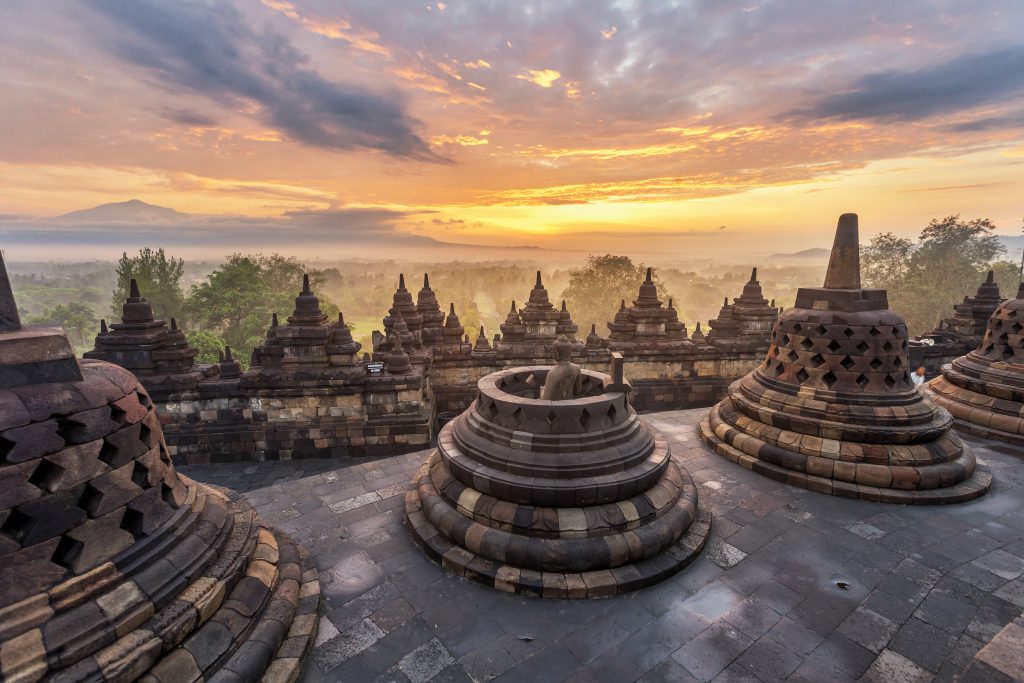 Borobudur Temple is the world’s largest Buddist Temple which features 72 Buddha statues inside the stupas surrounding the central dome. The magnificent sunrise at Borobudur temple is truly magical as the sun rays gently light up the intricately designed struture with over 2000 relief panels. Make sure to book your sunrise tour prior to your visit as you will get early access to the temple. However, due to its popularity, Borobudur swarms with tourists a little after the gates open at 6 am. Therefore, in terms of avoiding the crowds, its better to be there when the gates open. 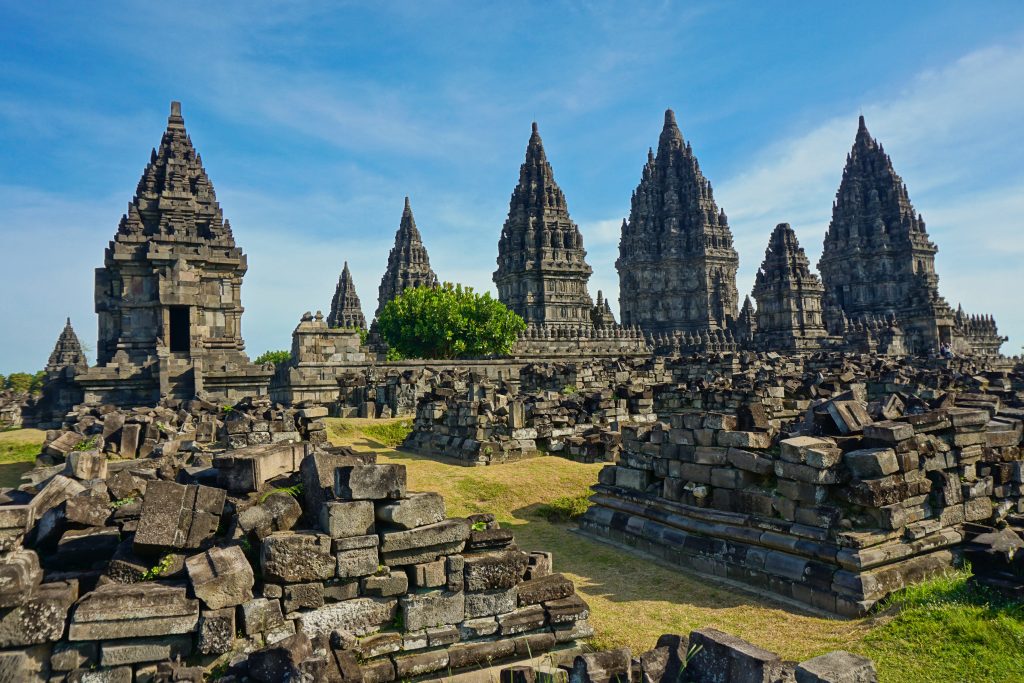 Yogyakarta is rich with legends and folk tales pertaining to the prince and princesses. One in particular, surrounds the ruins of Prambanan. The story follows a princess named Roro Jongrang who asks a prince to prove his love for her by fulfilling two conditions. One, build her 1000 temples in one night. The compound of Prambanan is the standing proof that the prince fullfilled this wish, thus showing just how deep his love for her ran. 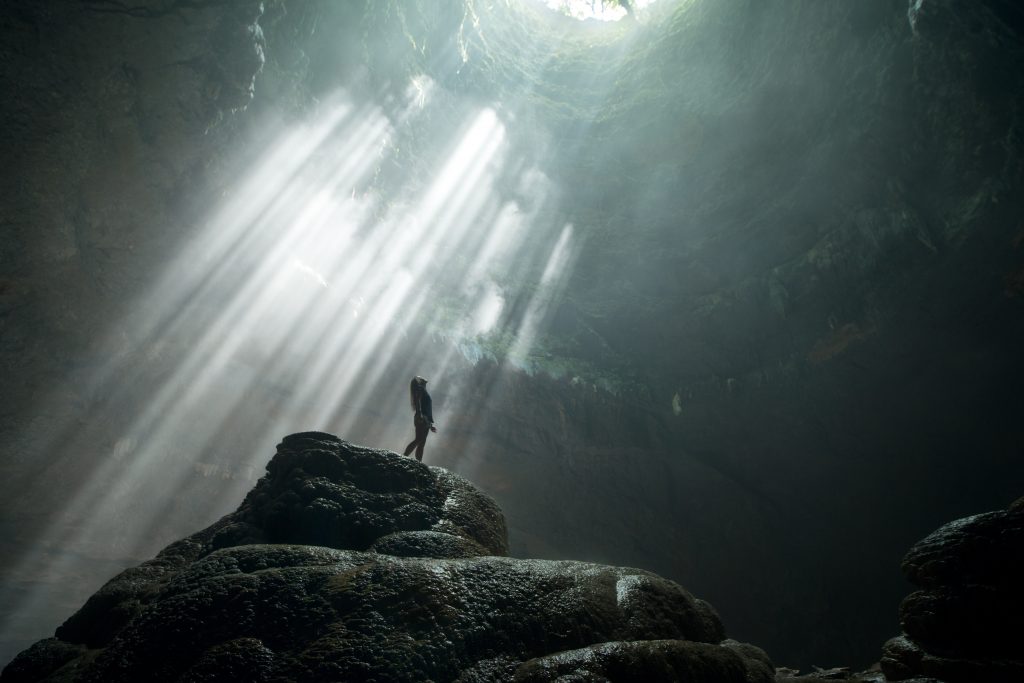 Repel down a rope 60 m deep and release your inner Indiana Jones to explore the opening of this breathtaking cave. Goa Jomblang’s unique feature is the sunlight that directly hit the surface of the rock bottom. The best time to visit the cave is between 10 am – 12 pm. Only a few number of people are allowed to visit in a day so make sure to book your spot early. 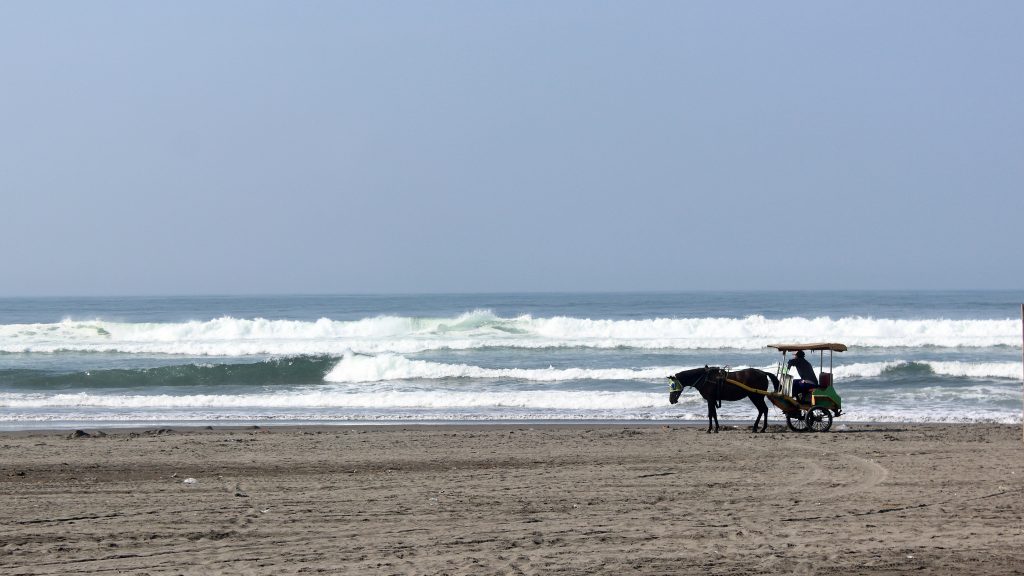 The roaring waves at Parangtritis beach compare to none other. Since the beach open out into open waters, it’s no wonder that the waves crash like mighty thunder. Parangtritis surrounds the eerie folk tale of Nyai Loro Kidul or “Queen of the South.” Legend says that if a person dives into the water wearing green, they will be swept underneath the waters, for the queen fancies anythign in that color. Unfortunately, there have been a few drowning occurrences. Officials say its because the waters are not safe for people to swim in… or is it because they were wearing green? 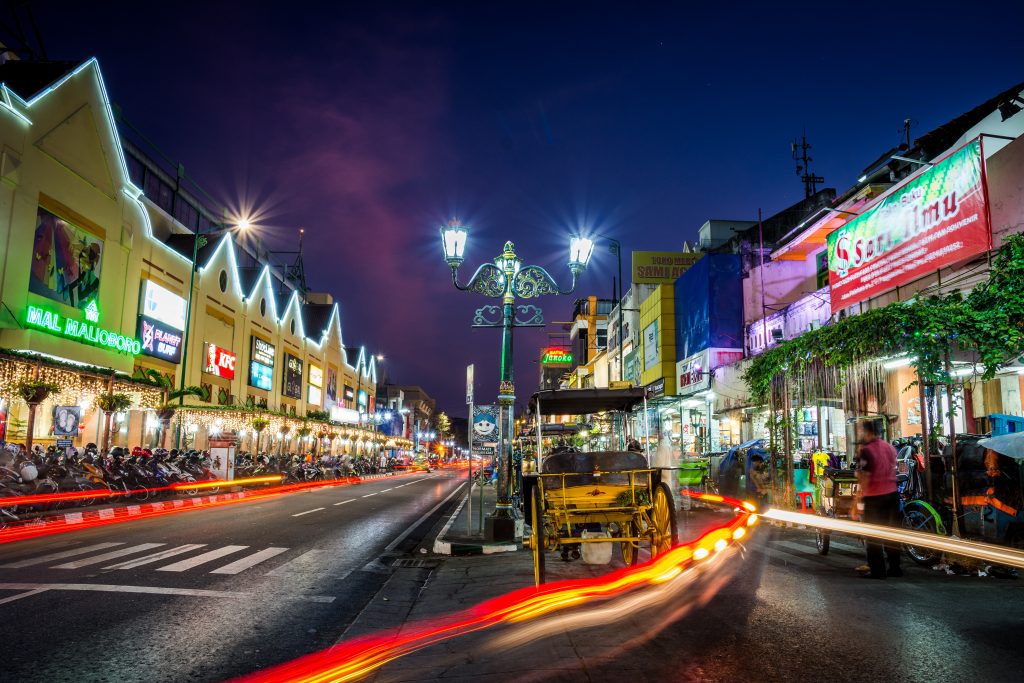 Endless choices of food stalls, restaurants, and shops line the colorful Malioboro Street. Many restaurants seat people on wooden mats spread across the sidewalks where they serve Yogyakarta delicacies like nasi gudeg and bakmie jawa. The best time to visit Malioboro Stree is after 7 pm when the colorful lights and busy atmosphere will give you the best of vibes. 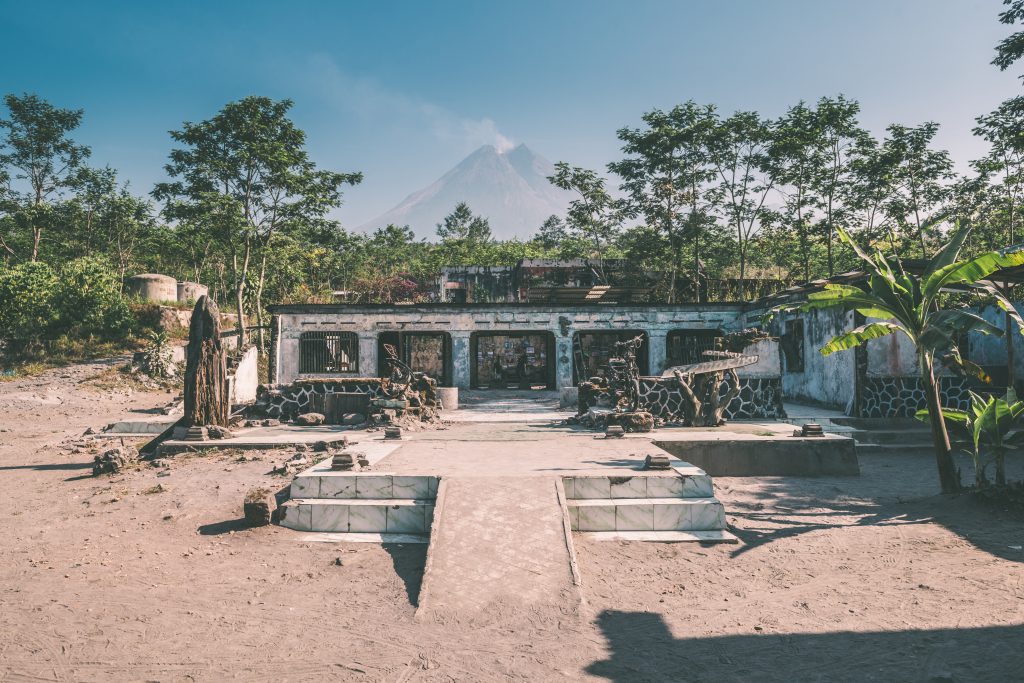 The fatal 2010 eruption of this volcano took over 300 lives. Although many evacuated, the aftermath of this horrendous event is heartbreaking. The remains of the eruption are made into memorial sites where visitors are able to rent a jeep along with a driver. One of the sites is the house of Mbah Marijan, the spiritual guardian of Mount Merapi. On the day of the eruption, rescuers came to his house to evacuate him but he refused. He died in the hot fumes of the volcano along with the rescuers, but his legacy remains along with his abode. 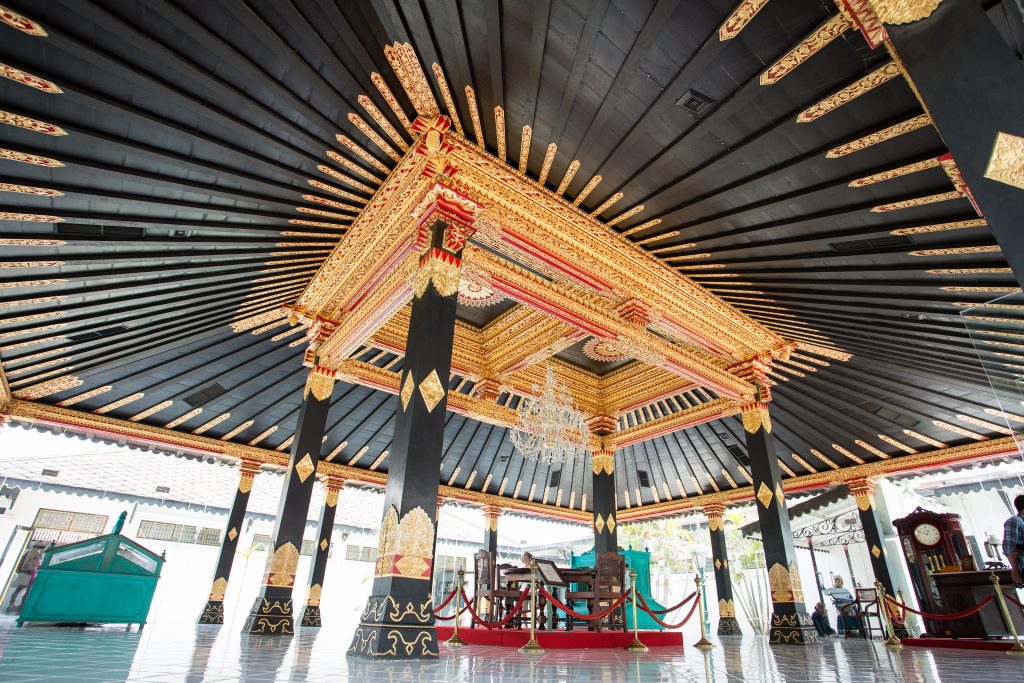 This is a palace complex where the current Sultan of Yogyakarta resides and where visitors are welcome to walk the grounds. A room solely dedicated to the past rulers portrays portraits of each ruler along with information regarding them and their rule. You will notice that sultans have overwhelmingly long names. Ngarsa Dalem Sampeyan Dalem Ingkang Sinuwun Kangjeng Sri Sultan Hamengku Buwono Senapati ing Ngalogo Ngabdurrokhman Sayidin Panatagama Khalifatullah ingkang jumeneng kaping X is the full name of the current ruler!